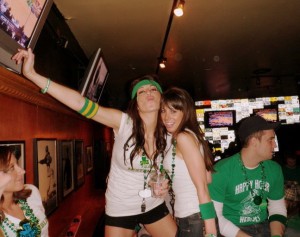 “I can’t believe they’re actually showing this,” exclaims a Michigan State fan perched at a table in the middle of the Lakeview bar The Tin Lizzie, as the obscenely hilarious sex scene from “Team America” distracts everyone from the grim reality soon to return to the television screen. Sporting a green Ghostbusters T-shirt and backwards Michigan State cap, his laughter gives way to tension when the bar’s TVs returns to the evening’s first Final Four contest. Surprisingly, the “hometown” Spartans—this is a decidely partisan bar—trail the underdog Butler Bulldogs 44-37 late in the second half. Nothing steals his eyes from the 32-inch flat screen mounted above a women’s bathroom until a shout of “Fuckin’ man up!” rips through the rigid atmosphere, evoking a shifty glance. After a critical Michigan State rebound with about thirty seconds remaining, a pessimistic outcry—”They’ve still got to make the shot”—is immediately trumped by MSU’s fight song erupting over the bar’s PA system and chants of “Go green!” echoing through the packed bar. Now nervously clutching his headgear, the Spartan fanatic braces for what will be his team’s last opportunity to pull out a win. When it falls short, he and other Tin Lizzie patrons look collectively shocked and perplexed. Obviously not the way they imagined starting off their Saturday nights, but at least he has a backup plan: “How about we not be able to remember this in the morning?!” (Darrel Sangster)