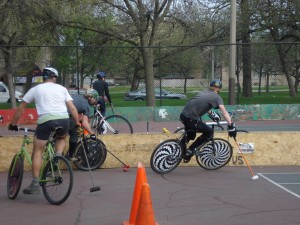 It’s not unlike the movie “Sandlot.” Instead of PF Flyers, there are bicycles. Baseball bats are traded in for homemade mallets. And Tecate and Pabst take the place of soda pop. The attitude, the camaraderie, however, is all the same. “Find a decommissioned tennis court,” says veteran player and organizer Keith Evans. “We all show up, throw in, just like pick-up basketball.”

By three o’clock, two bike polo games are in full swing with about ten onlookers hanging around the tennis courts in Garfield Park. About two years ago, with permission from the Park District, Evans and company fixed a wooden border around the base of the tennis-court fencing. The wood acts much the way the walls at hockey rinks do. This year, they acquired wood from the Rebuild Exchange and built a partition dividing the courts in half, allowing for two games at a time. Three players per side ride around on single-speed bikes, yelling, “Coming to ya!” or “Left! Left!” and finally “Goal!” The teams return to their sides and tap mallets with one another in congratulations, the polo version of football or baskteball’s butt-tap.

Though the core group of Chicago bike-polo players tries to play year round—“We played on a day that ended up being eighteen below, just bundled up and riding in circles so that you’d get warm,” says Evans—today is the semi-official opening day. Mixed in with the veterans are friends and complete strangers, all welcomed equally. The group has built several “loaner bikes” for newcomers that don’t want to risk damaging their own rides. A mash of random parts, but aside from the occasional broken saddle, these bikes work.

A tall kid with glasses walks the perimeter of the court. He stands at the entrance as one game slowly winds down. Ben, one of the organizers, comes up to the new kid. He’s got some blood on his forearm and a bandage on his hand. His other is holding a Pabst. “You play yet?” he asks the kid.

“I don’t think you’ve got a frame that fits me,” the new kid answers.

“None of the frames fit. That’s how it works.”

Ben leads the kid into the courts, and they outfit him with a bike and mallet. Someone yells, “Three! Two! One! Polo!” and the game begins. After a few minutes and maybe a few falls, his nerves are gone and it’s all smiles.

Standing in a little nook created by the wooden partition in the middle of the courts, some of the guys talk about new boards  the Park  District might donate that are more akin to what you would actually find at a hockey match, a step up from the plywood and two-by-fours that now border the courts. “We’re bartering with the city,” explains Evans. “We’re going to teach kids to play bike polo in exchange for the space. Like an artists-in-residency program, but sports-in-residency.”

“Or turning into someone like you,” a girl jokes back.

The early spring sun sets sometime around seven, and a few people take off. The lights come on over the court, and most of the day’s warmth is gone, however, you can still hear the squeaking bicycle tires and slapping mallets for quite some time. (Peter Cavanaugh)