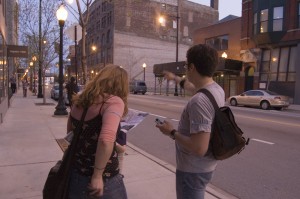 Back in the fall of 2008, Tamara Westfall was working seventy-to-eighty-hour weeks at Channel 26. “I didn’t have time for anything, didn’t have a life, ” she recalls. “It was miserable.” But one day she sped through her work in order to get out in time to play a street game her friend Dax Tran-Caffee was organizing. The game was called “The Architect and the Urchin,” and it took place in the streets, sidewalks and occasional parking garages of the Near North Side. “I played the game and it just reinvigorated me,” Westfall says. “It was a complete self-awareness reminder that I am a human who, beyond money and professional association, also needs fun… It kind of pulled me out of my shell.”

“The Architect and the Urchin” was the second street game Tran-Caffee had run in Chicago, and the first of his own creation. The previous spring he had organized “Journey to the End of the Night,” a street game originally created by a San Francisco-based collective, the Playtime Antiboredom Society, as part of an alternate reality game called SF0. “Journey” takes place over about five miles of the city, with a different starting point and finish line every time it’s played. Players start out as “runners,” trying to cross the finish line after checking in at each of five checkpoints. Meanwhile, a group of volunteer “chasers” is released to hunt down the runners. A runner who gets tagged becomes a chaser and pursues other runners in turn. The goal is to cross the finish line either as a runner, in the shortest period of time, or a chaser, having tagged the most runners. Safe zones around checkpoints and convoluted routes lined with hiding places make the game about much more than just physical endurance.

Tran-Caffee ran “Journey” in the spring of 2008 and 2009, but he’s since departed for San Francisco. This year Westfall has taken over the game, and “Journey” will begin at 7pm this Saturday in Eckhart Park. Westfall is expecting a large turnout for the game, which is free and publicized entirely through word of mouth and flyers. In 2008, about 150 people participated, and last year the number approached 300. This year Westfall is expecting about 600 players, which she hopes won’t overwhelm the afterparty held at the finish line.

Westfall is moving to Los Angeles this summer and she doesn’t know if anyone will take her place, so this may be the last time “Journey” is played in Chicago. Even if someone else does organize it, the game will be different; each time a street game is run is almost like a new adaptation of the same work, since their surprising complexity allows for different themes and messages to be embedded. For example, “Architect”’s path took players through both the opulence of River North and the remains of the infamous Cabrini-Green housing project, showcasing the geographic proximity of the two extremes without explicitly calling attention to it. In December 2008, Tran-Caffee organized “Cruel 2 B Kind,” a street game in which players attempt to “kill” other players by complimenting them. The trick is, the game was played on busy Michigan Avenue and no one knew who else was playing, leading to scores of out-of-the-blue compliments to strangers and, perhaps, a lesson in lifting downtown alienation. But despite the deeper significance of street games, Westfall recommends “Journey” to anyone looking for a fun and unique evening. “That’s how I got started,” she says. “I just wanted to get out of work.” (Sam Feldman)

If anyone wants to know more info on our cooperative and efforst c/v on over to –
http://www.chicag0.org