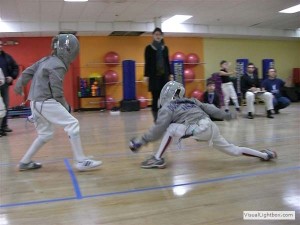 Elton John’s “Can You Feel the Love Tonight” is playing faintly in the basement of the Polish National Alliance in Sauganash. It’s an odd song to accompany the action in the room. The ceiling is low and wrapped in wires and fluorescent lighting, and kids are running laps. When they finish running, they talk about “South Park,” about Facebook, about the time they spilled an adult’s wine glass in Marcel’s basement.

Coach returns. “Hey come on. Okay stretching. Starting footwork in two minutes. Why is nobody here?” Attendance is decidedly low on Cinco de Mayo at the Midwest Fencing Academy. Oh well. It gives Coach Hristo Etropolski more one-on-one time with his young fencers. Born in Bulgaria, Coach Hristo began fencing at 13 and now coaches sabre weapon fencing to boys and girls of all ages and skill levels. He’s sent fencers off to full fencing scholarships at Ivy League schools, and he will be taking competitors to the the U.S. Summer National Championships in Atlanta this July. Everything in fencing, Hristo says, “has to do with balance and control.” His coaching style too is one of balance and control: balancing work with fun for the young fencers and controlling each fencer’s progress with individual coaching attention he says are key tenets of his academy.

Jacob, one of the older fencers at this practice, leads the footwork exercises. Coach chimes in: “Don’t cross over. It’s not a race.” When the lunges are done, footwork is complete. “Take a very little break,” Coach tells the group, “Then we start fencing.”

The first to fence are Max and David. The masks make each fencer faceless. In full white uniform, Max looks like he’d be an excellent beekeeper, but in fencing, he’s no match for David’s advanced age and experience. The match ends 15-1. Scores come in from an electrical system to which the fencers and their uniforms are connected. One scores points by a green light. The other, red. Human referees intervene when technology shows a tie.

Marcel and Jacob fence a more even bout. The peer ref gives Jacob a contested point. Marcel disagrees. “You didn’t hit him,” the ref contends. “Yes I did.” “You hit my hand,” Jacob says citing a scoring rule, “Stop crying over every point.” Over by the back wall, Max now takes on Magda, a scrappy young fencer wearing sweat pants with snowflakes on them. She is the only girl at the practice, but she can hold her own with her sabre weapon.

The only fencer wearing a black mask and uniform, Coach Hristo is tall and stout. He resembles a bomb squad member as he practices with young David. But here, he disassembles David’s technique, giving pointers and pointed criticism. “Too late…start accelerating sooner…no…like this…you’re going to fast with the body…good.” There’s a disputed call on the other side of the room. “That’s bullshit,” a prepubescent voice exclaims. “Watch your language,” Coach calls out. Laughter in the distance.

One of the last matches of practice is a lethargic duel between Michael and Jacob, two middle-school peers. “Come on Michael. You’re in it to win it,” says a sarcastic spectator. In return, he gets flipped off. Boys will be boys at the Midwest Fencing Academy—and they all have weapons. No one gets injured, though; they’ve been coached well on how to use them. Coach Hristo jokes with Marcel, and practice winds down. (Andrew Rhoades)