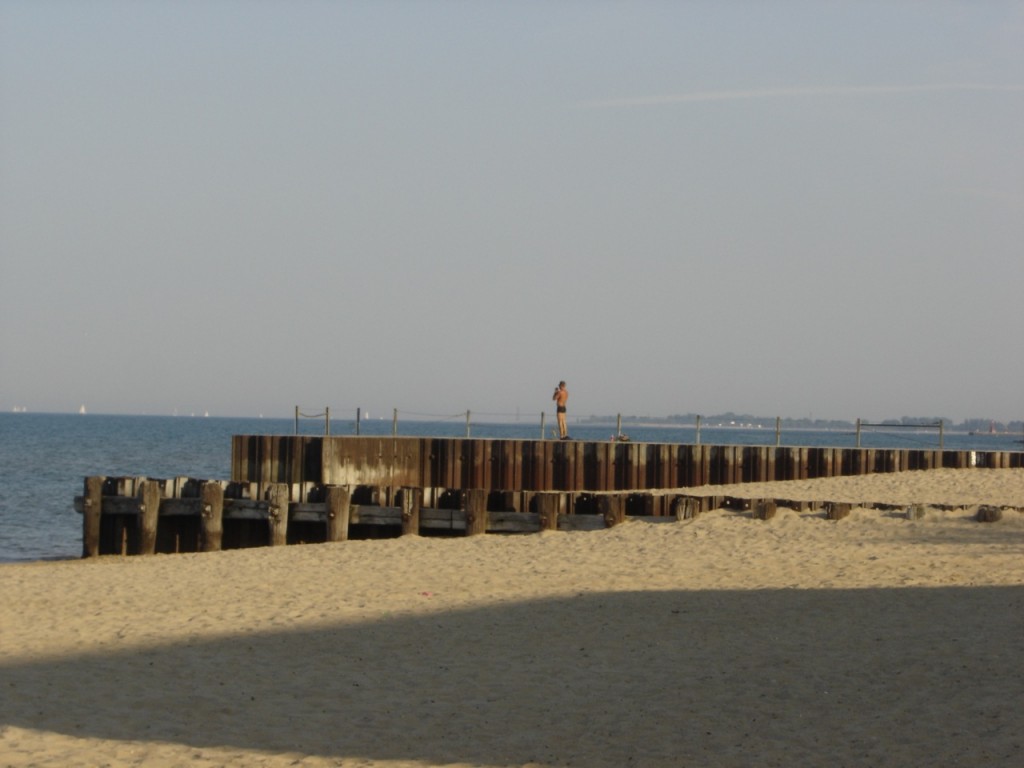 Imagine a Chicago summer night, well past midnight, a long day of crowds and trains, sirens and screens, dirt and smoke, and more of the same the next day. But all of these are behind you, literally, because you are not stewing in a bed of thought and worry, you are doing the breaststroke out to a buoy 200 yards off the shore of Pratt Beach. And in an act of defiance, you’ve slipped off your running shorts and hung them around your neck.

Memorial Day usually marks the opening of Chicago’s great exodus out of our condos and apartments back to the sun and the waters of Lake Michigan. But for the tribe of lake swimmers, we’ve already been braving the fifty-degree waters for a month and some as early as April.

For me, it began in graduate school twenty some years ago. Demoralized and already behind after only a month at the University of Chicago, wondering if I ought to quit, I followed the path of all forlorn U of C students to Promontory Point to stew and stare in hopes of some Delphic answer. And the oracle presented itself as they always do in a symbol of absurdity. As I looked out into the grey waters that mild October afternoon, I discerned four bobbing objects, swimmers making their way through the choppy surf. Amazed, I watched and waited for them. And then, to my complete surprise, what came out of the water were not he-man triathletes, but three septuagenarians without wetsuits, smiling and waving me in. I was hooked.

There are many ways to enjoy the natural wonder at our doorstep—running, biking, boating and all the rest. But I swim not just for the exercise. Swimming is almost a kind of ritual of purification, a way to cleanse the mind, or as Thoreau described the benefits of walking in the woods, a way to “return to my senses.”

Indeed, the “great water,” as the native people called Lake Michigan, has a medicinal effect on the mind and the body. Part of it is our ancestral amphibian origins animating our blood with hormones, awakening the nerve sensors on our skin and reminding us that, after all, half of what we are is just what we are floating in: water.

Sometimes, crawling through the water, for that’s literally what you are doing and why they call it the crawl, you feel as if you have restored some set of instincts you’ve long ignored.

Though it’s glorious to swim day or night, the best time is early morning. The sun shimmering on the horizon, framed by your arm and torso, the city a forgotten façade of buildings behind you, you feel as if you are traveling through some other world. And you are. The landed world of walking is no more, and for a little while at least, you can feel a part of the fish below you, and the gulls above; and sometimes when time has stretched out of all proportion and your breath feels in sync with the twist and roll of your torso, it can even seem as if you are flying.

But it’s not always a solitary act, as those may think on shore. Where I swim, off of Pratt Beach in Rogers Park, a true remnant of another time before the city disconnected us from the shore, I see my tribe, we wave down the beach or stand and talk or sometimes surprisingly nearly bump into each other well out into the lake, which is where I met my neighbors, Branislav and Mirjana, doing the back stroke. Imagine meeting neighbors for the first time a quarter mile off shore floating, with, yes, your swimsuit around your neck.

But what were their first words to me? “Oh you like to swim nude, too?”