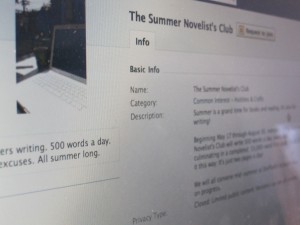 A year ago last weekend, I walked across the stage and got my master’s degree in writing from Columbia College. Cranking away at a book-length manuscript tends to burn you out, a condition I referred to as the post-post-graduate writing hangover.

Less than a month later, my father took his own life. For the next few months, I sank deeper into the couch cushions.

Momentum—or the lack of it—took over my writing life. When I finally emerged from my suicide-survivor’s exile, the only words I put down on the page were cover letters to go with a redesigned resume. Nothing creative.

Until this summer, when a former professor and friend, Sam Weller, threw down this gauntlet on his Facebook wall: “I am going to write 500 words a day, every day, until the end of August. This will give me a 53,000-word draft of a novel by the end of summer. Anyone care to join me in this challenge? It’s just two pages a day.”

I decided to pick it up, to get myself moving creatively during that awful time of piecemeal employment. Sam set up a Facebook group, and the Summer Novelist’s Club was born.

“There’s something to me about summer that’s way better than a New Year’s resolution,” Sam, who teaches Fiction Writing at Columbia College Chicago, told me over pints of Boddingtons in Lincoln Square. “If you’re in academia, summers are these pristine windows of time where you’re left alone. The minute the spring semester is done, I wanted to hit the ground running.”

Sure, the vast majority of writers in the Summer Novelist’s Club are somehow related to Columbia College, but not all of them. There are writers signed up from Los Angeles, Minnesota, New York City, Michigan. The discussion boards are easily as lively as you’d find in a writing workshop.

“I needed to organize this so everybody is held accountable. Talk is cheap in the literary world,” Sam said. “If social networking isn’t perfect for that, I don’t know what is.”

Leah Tallon, a Columbia College grad student, is one of the Summer Novelist’s Club Facebook administrators. So far, she said, it’s kept her to her 500-word-a-day rule.

“This whole public humiliation thing really works for me, apparently. There are days when I’m like, ‘I can’t do this,’ especially the last few days when I’ve been sick. But I go look on the Facebook page and I see other people’s accomplishments.”

James Lower, one of my fellow Columbia M.F.A. graduates who’s managed to land a nine-to-five gig in this economy, at first wasn’t sure he wanted to join.

“I was kind of skeptical of it at first, and I wasn’t sure whether I wanted to be a part of that. The communal aspect is what at first made me skeptical, and then drew me to it. I needed a kick in the ass and needed to keep motivated.”

I’m squarely in James’ camp when it comes to needing constant motivation. But that’s exactly the point, Sam told me.

“Once that motivation starts, it really becomes addictive,” he said. “I wanted to make people seize the summer.”

The truth is, I’ve taken a year off from writing. I used the fact that I’d just written a novel for a thesis to justify a lengthy break from the page. After my father’s suicide, I used that as an excuse not to do much of anything. But somehow, this social-networking experiment of Sam’s has lit that fire under me, and one week in, I have 4,700 words toward a new novel.

Like James, and like so many other members of the Summer Novelist’s Club, I’m not sure where my story is going—I’m still finding it, still exploring what it has to offer. But for the first time since I sat in a writing workshop, I feel part of a community of writers. There’s a healthy competition brewing online, and I don’t know that there’s a better way to motivate artists to practice their craft than to set, and then raise, the bar for them, daring them to reach higher.