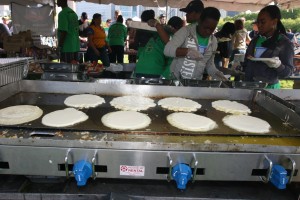 It’s another lazy Sunday downtown. The sun is low above the lake; stores are closed, and the trains are sparsely populated. Then 20,000 bicycles hit Lake Shore Drive. Their peddlers are welcoming summer and biking the Drive. Some are not yet old enough to drive, and others bike a drive, a street or avenue every day. Some ride pricey bikes built for speed, and others drive rented tandems at a slow pace. The idle thirteen gallons of syrup under a tent in Butler Field, however, will please the rolling multitudes indiscriminately.

“How are they tasting?” yells out Tim Lane, the man in charge of feeding thousands of hungry hotcake hunters. A member of his team is testing the first of countless pancakes to be flipped and served at Bike the Drive. The surrounding tents are peddling energy bars and energy drinks to the morning peddlers, but Tim and his team from Goose Island, under a black tent, are making good on a promise to feed those biking the drive their fill of pancakes and syrup.

Batter first touched down at six forty-five in the morning. There are seven grills for seven flippers. An eighth grill on the end is not yet manned. One cook fits twenty-four cakes on his grill, a feat not likely to be bested. When the batch is completed and moved along the line to heated transitory stations, he squirts an orange liquid that sizzles on the grill. The mixture? “It’s a secret,” he says. When the secret liquid is spread evenly, he fires a batter gun twice per pancake, dropping the perfect circle onto the heat below. Within Tim’s team are different pancake methods and tendencies. One flipper does a modest dance to the distant music while he waits for a side to brown. Another stacks a finished batch in even piles of three before moving them along the line.

When a quarter to eight hits, a Goose Islander commences the all-you-can-eat pancake breakfast: “Six lines. Step on up.” The pancake reserves from an hour of cooking dwindles by eight and the flippers are back to the grills. After a visit to the syrup station, bicyclists look for the right patch of grass where they will reward themselves for an early-rise and exercise.

Sitting twenty yards from the pancake tent, the Sirkin family is finishing their breakfast as the weather, following the pancakes’ lead, begins to get hot and sticky. Kayla and her older brother David set out from Lincoln Park with their father Clive at seven. They’ve made it to pancake heaven by 8:15, where they will wait for their mother to finish her longer ride. “I find it ironic that after a healthy bike ride, you eat pancakes covered with syrup,” says Clive, an avid Lakefront Trail cyclist who bikes early hours—generally without the 20,000 others. The irony is lost in the taste of the pancakes for David who quickly finished his helping. He biked the drive on just five hours of sleep after a night with friends and countless Sprites and Cokes.

Kayla is tentatively trying to cut a pancake with her plastic fork, not sure yet whether she wants more or if her breakfast truly has been all-she-can-eat. “How are your pancakes, Kayla?” her father says, “You don’t seem to be moving very assertively. Hand it to me. I’ll shorten the remainder for you.” The Sirkin’s breakfast in the grass is over, but the tent it came from is still sizzling and still flipping, a kitchen in the park. (Andrew Rhoades)