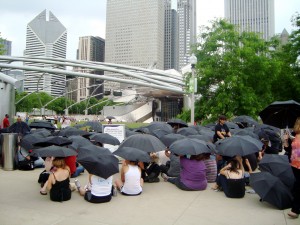 These were the simple yet precise instructions for the BP Black Friday Flash Mob. The essence of a flash mob is in its secrecy. And so the protestors, all alerted via Facebook and word-of-mouth, were relatively unaware of who actually invited them to participate. The Facebook event, entitled “Oil over the Bridge,” was created by Oliver Bridge, presumably a pseudonym. In addition to those precise instructions, an auxiliary message requested: “Anyone who wants to be a secret agent, wear a white hat.” This is where Lott Hill steps in. In donning his white fedora, Lott has no idea what he will be getting himself into, given the vagueness of the instructions.

The circumstances are far from perfect: the all-black ensembles aren’t conducive to the 89-degree humidity and the targeted bridge is closed due to the parade a few blocks over—if only “Oliver Bridge” thought about the Blackhawks winning the Stanley Cup. A security guard stands sentinel at the gated-off BP Bridge, but just as nothing is stopping the oil from flowing, nothing gets in the way of these demonstrators. Lott got to the scene early and noticed a few people following instructions intermittently throughout the park, positioning themselves at the bridge entrance at the edge of the Millenium Park Lawn. He stands there unassumingly, trying to remain inconspicuous when someone shoves a white parcel at him and scurries off. Inside of the bag, Lott finds six whistles. He takes one and hands the package over to “the other undercovers,” and together these white-hatted operatives wait for the time to strike. In the interim, he notices an amassing of other protestors with umbrellas in hand and a mission in their eyes. The original design of the flash mob was for people to convene on the bridge and at the sounds of the whistle, the seated mobbers would pop-out and open their umbrellas, starting in the middle of the bridge and then “spill out” all across the BP pedway, creating the visual effect of an oil spill. 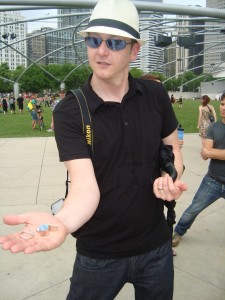 At the appointed time, “secret agent” Lott blows his whistle, and leads this silent demonstration into action. The other whistlers chime in, and the group of some hundred or so protesters opens their umbrellas in a ripple effect, perfectly mimicking the flow of oil gushing into the Gulf of Mexico. When asked by curious onlookers what the mob is all about, Lott replies with the exact response Oliver provided them with: “The oil must be stopped.” An audience develops. A group of, um, pre-gamed parade attendees chants “Fuck you BP” for the duration of the demonstration. Some fifteen minutes later, the whistles are blown again and the dissenters reintegrate into the general cheerfulness of Millennium Park.

Although the majority of the city was distracted by the Hawks celebration just two blocks over, Lott feels like “this protest mattered.” For those bystanders who internalized the purpose of the flash mob, they will “reflect on the negative consequences of BP’s corporate greed.” Perhaps they will not boycott the company, or “be as passionate as us in their opposition,” but the notion of them being more thoughtful in terms of the current situation is “good enough” for Lott. However, this secret agent is taking a break, and is running off to the airport for a tour around Europe. However, he is bringing his black umbrella along, “just in case.” (Rhianna Jones)