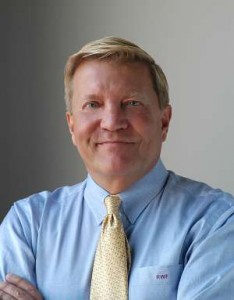 If you drive through the South Loop or Bronzeville on a Saturday morning, there’s a good chance you’ll spot 2nd Ward Alderman Robert Fioretti out on his bicycle. Outgoing and lively, Fioretti would happily take a break from his bike to chat with you, but he might admonish you too. “Don’t take the car,” says Fioretti.

The alderman covers twenty-five miles each weekend, but he’s not your typical weekend warrior. “You’re able to see things, instead of just driving by things,” says Fioretti, who uses his weekly outings as a chance to see his community. Fioretti says he takes notes, calls 311 and “gets things fixed.” He isn’t talking in the abstract: the alderman carries graffiti-removing equipment with him and often goes ahead and makes the repairs himself.

“It’s a great way to stay in touch,” says Fioretti, who is inviting community members to join him for his weekend bike ride on Saturday, July 10. Getting out of a car and onto a bike, he says, will give community members a chance to experience an area they may drive through every day without really noticing what’s around them. “History actually happened at some of these locations,” says Fioretti, whose tour includes dozens of stops.

The alderman, who often stops and chats with his constituents along his bike ride, says he wants people to slow down and really see what’s around them in his ward. Among the dozens of stops on his bike tour are Holy Family Church, built in 1857, the monument to the Haymarket Riot and Frank Lloyd Wright’s row houses on South Calumet Avenue.

“If I had my druthers we’d go right past where the Chicago Cubs won the championships, but it’s too far,” says Fioretti. If you’re too young to remember, Fioretti’s talking about West Side Park, the baseball stadium that hosted the Cubs back when they were good (in 1908). Now the site is home to the UIC Medical Center.

Fioretti’s ten-mile tour will include the east side of his ward and Bronzeville (next year he’ll do the west side, he says). The ride starts at Dunbar Park, 300 East 31st Street. Registration begins at 7:30am and the tour departs at 8:30am. Register online at www.chicago2ndward.com. (Ella Christoph)