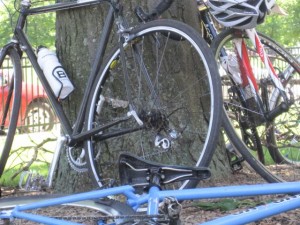 The obstacles to biking in Chicago seem endless: the bad weather, the stolen bikes, the angry drivers.  But figuring out how to get out there and face those obstacles shouldn’t be a challenge.  Maybe it’s because of all the challenges that bike enthusiasts in Chicago are so, well, enthusiastic about biking—and getting you biking too.

There’s hope even for you car people out there, according to recovering “autoholic” Jason Rothstein, author of “Carless in Chicago: Live and Thrive in Chicago Without Owning a Car,” from Lake Claremont Press. Pick up Rothstein’s book for advice and inspiration on transitioning to a car-free (or low-car) lifestyle.

You’ll need a bike to get going. In Chicago, buying a bike is an easy way to support local nonprofits that work to build community through building bikes.   Try  Working Bikes Cooperative, 2434 South Western, which is open Saturday 10am-5pm and Wednesday noon-7pm (go early for the best selection).  Your purchase of a used bike will help fund their bike donation program, which ships bikes to Africa and South America.  The Recyclery Collective, 7628 North Paulina, sells used bikes Saturdays from 10am-noon and donates bikes to low-income families as well as teaches kids bike maintenance. Or head down to Hyde Park, where Blackstone Bicycle Works, 6100 South Blackstone, sells both new and used bikes and teaches children bike and entrepreneurship skills.

While the Chicago Lakefront Trail, a beautiful eighteen-mile path along the shore, is an obvious favorite for bikers, it’s not your only option. Major Taylor Trail, a six-mile trail across the South Side of Chicago that opened in 2007, is named after Marshall “Major” Taylor, an African-American bicycler from Indiana who won the one-mile world championship in 1899 and spent the end of his life living in Bronzeville.  The Major Taylor Bike Society (chicagomajortaylor.org) works to encourage biking on the South Side and in African-American communities.

Buy the Active Transportation Alliance‘s Chicagoland Bike Map ($10) for more bike paths. The Alliance advocates for bikers and has resources for bikers on their website at activetrans.org. Foodie-slash-bikers should try out one of their four Bike and Dine events in various Chicago suburbs this summer—bike, eat, repeat (and repeat).  Registration is $50.

Join a bike club to ride with fellow bikers—there’s a club for every niche.  The Chicago Cycling Club offers rides multiple times a week that cover anywhere between ten and 100 miles.  Another crucial reason to join is so you can buy members-only biking gloves with the Chicago flag on them.  Bike team XXX Racing invites all bikers to join them for their Saturday morning training ride at 7am.  The ride starts at the northwest corner of Wicker Park and is “no drop”—all bikers bike as slow as the slowest biker—until Highland Park.  From there back to Wicker Park, pedal to your heart’s content.

Join Critical Mass before riding home from work on the last Friday of every month. The Mass starts in Daley Plaza at 5:30 pm, and you “may not wind up where you think it will wind up… like real life,” according to their web site.  Expert “corkers” block off cars from passing through so you stay safe while biking on busy streets and even running red lights, making it a popular option for bike newbies and obsessives alike.

Even the most intrepid bikers are often scared off by snow, sleet and ice, but Chicago Bike Winter believes you can tough it out, and maybe even have fun doing it.  Check out bikewinter.org to get tips on what to wear (gel toothpaste on your lenses so they don’t fog up); how to dress up your bike (fenders); and how to fall (avoid landing on your head).

After a long day of biking (shower optional), swing by the Handlebar, 2311 West North Avenue, and have a PBR with fellow bikers—they’re only $1.75 on Messenger Mondays. Messengers get a free plate of French fries.

If you leave your bike in the basement and never go anywhere, maybe you’ll never have to use the Chicago Stolen Bike Registry (chicago.stolenbike.org).  Chicago consistently ranks in the top three worst cities for stolen bikes according to lockmaker Kryptonite, so lock up your bike and cross your fingers.

Attend a workshop and learn basic bike maintenance at West Town Bikes, which offers classes for adults as well as its main programming for underserved youth.  For the more ambitious, West Town Bikes offers an eight-week Build-A-Bike course for $200. (Ella Christoph)