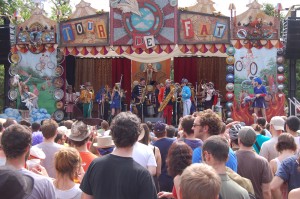 That bicycle on your Fat Tire bottle is more than just a logo. In 1989, New Belgium Brewing Company founder Jeff Lebesch gained an affection for Belgian-style beer on a trip bicycling through Europe. His taste for Belgian-inspired beer and reverence for the bicycle that brought him to it remain two tenets of the Fort Collins, Colorado craft brewery, which saw eighteen-percent growth last year. Bryan Simpson, spokesperson for New Belgium, says that bicycle culture “is pretty much in our DNA.” The company went commercial in 1991 when Lebesch and his wife Kim Jordan took their brew from a Colorado basement to bottles bearing a likeness to the fat-tired bicycle Lebesch traveled on over twenty years ago.

Simpson says that in 1999 and 2000, New Belgium made a conscious effort to return to its bicycle roots and started holding events that engaged the bicycle community in Colorado and wherever tires are spinning. Now in its eleventh year—its third in Chicago—their Tour de Fat celebration kicks off Saturday in Palmer Square Park. “The events we do are a great way to leave a lasting effect on the community and really raise a lot of money for local nonprofits in just one day,” says Simpson. He enjoys Tour de Fat for the eclectic crowd that gathers to celebrate beer and bikes, ranging from a “hipster group next to the spandex people next to the sixties crowd.”

New Belgium gladly serves these various bicycle subsets, but they also try to get more bicycles on the roads of Colorado and the towns through which they tour. When their brewery, which employs about 220 people, has a bike-to-work day, they can get as many as eighty percent participation to hit the handlebars before and after work. Work for New Belgium for a year and you are the owner of a commuter bike, hand-built by Black Sheep Bikes, also out of the Centennial State.

Chicago itself is a major player in the two areas sacred to New Belgium. “Chicago has always been a great bike community. There’s a lot of infrastructure there and we enjoy teaming up with the local nonprofits in the city,” says Simpson. And with the Craft Brewers Conference that was held in Chicago in March, 3,000 craft beer enthusiasts and professionals including Simpson and New Belgium celebrated beer all over the city. 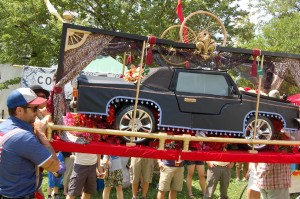 New Belgium finds that each city has its own distinct style in celebrating Tour de Fat when it rolls in. “We bring the same things to every event, but they are all very amorphous and you just feed off the energy the city has,” says Simpson. Saturday’s event will begin with a costumed bike parade and include live music and dance in celebration of bikes and beer. One of New Belgium’s favorite events is the car-for-bike swap where a volunteer trades a car for a commuter bike. The first-ever swap took place in Chicago, and the organizers are still looking for a volunteer to switch to two wheels in 2010.

For Simpson, appreciating beer and appreciating bicycles are similar concepts. “The craft beer movement is about treating beer like just as a sensory experience as food,” he says. It is the explorers who want to try new beers and take bicycles out touring, and if they don’t find New Belgium, the brewers will themselves tour the country providing Fat Tires on wheels and in pints. “There’s a lot of people who are intellectually curious and what we’re finding is that a little bit of knowledge and a lot of curiosity is what makes these [events] great.” (Andrew Rhoades)