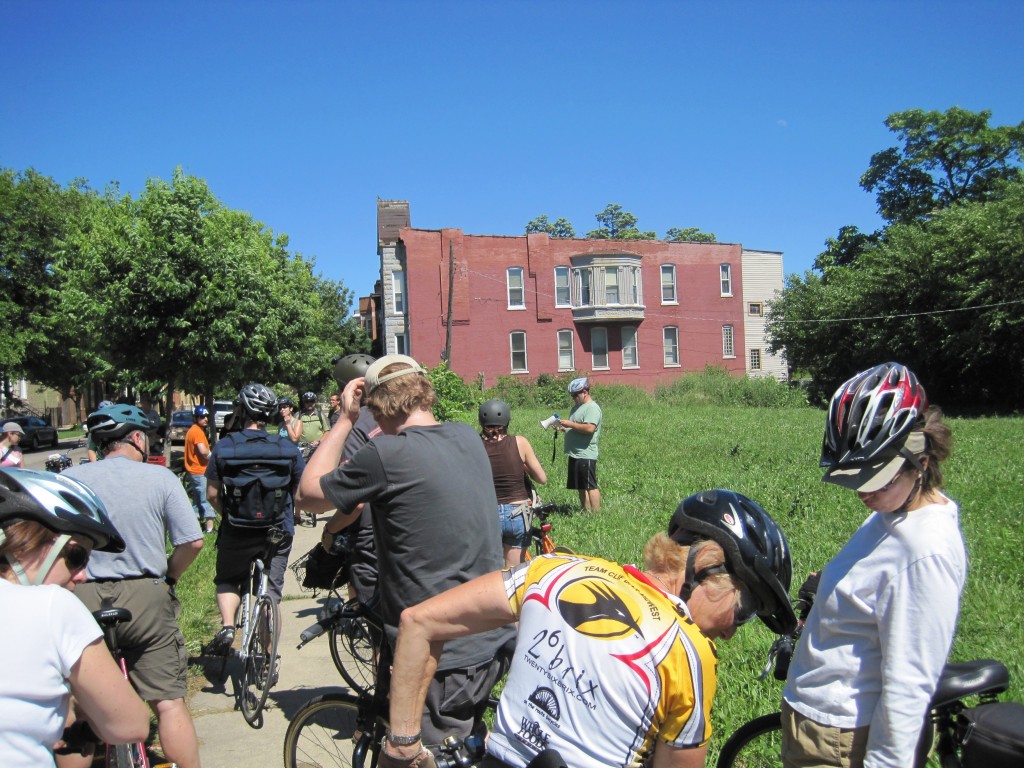 Sixty or so bicyclists, reflecting all hues of the hipster-to-spandex rainbow, listen attentively to the short stocky man standing in the overgrown vacant lot on Chicago’s West Side, as he reads from dozens of pages of laminated notes into a megaphone. Garfield Park is unfamiliar territory for the bicycle tourist, as the occasional incredulous local resident, seeking cooler confines on this smoking-hot summer day out on a porch, is happy to shout out. But Garfield Park is a marvel for historical preservation buffs, an outdoor museum of noteworthy structures and houses on the National Register of Historic Places. And that is what this ride is all about, an architectural tour of one of Chicago’s neighborhoods, conceived, organized and led by Lee Diamond of Big Shoulders Realty. Diamond’s been doing these rides for three years, nearly every month including winter, but this one is to be the last, at least in its current form. Not for lack of popularity, in fact; word has spread quickly about these tours and riders often surpass a hundred and major bicycling advocates like the Active Transportation Alliance have signed on this year as “sponsors.” Diamond, who looks more like a thirtysomething rocker (which he is, playing in a post-punk band) than a slick, fast-talking real estate broker, started the tours to bring together his passions of biking and architectural history, with the hope that they’d also serve as good marketing channels for his business. Today, he announces that he’s come to realize that putting in eighty hours a month and tens of thousands of dollars for events that bring in no revenue, is not a sustainable long-term proposition. That’s right, there has not been a charge to ride along with Lee, in spite of the extensive preparation and the in-depth nature (four hours plus) of each.

Diamond’s passion, commitment and eventual dilemma are characteristic of the city’s most ardent bicyclists. At its best, it’s a small-town community, driven by an altruistic spirit of helping one another without regard to self-interest (several unplanned stops on these rides occurred when a rider picked up a flat tire on Chicago’s sharp streets and someone changed it for them; another rider volunteered her home as a pit stop for dozens of strangers to refill water bottles). At its worst, it’s a small-town community misunderstood and ignored by the big city it lives inside. The Big Shoulders ride was not the only two-wheeled adventure that day; the Tweed Ride was going on at the same time, and later that night, The Midnight Marauders would chase the sunrise on the city streets. Bicycling in Chicago is thriving. Yet with Big Shoulders rolling to, perhaps, its end (Diamond is looking for ways to continue these rides in a more financially sustainable manner, a commitment that seemed to grow more resolute as the day progressed), and Tour de Fat rolling its bicycle carnival into town for its annual visit, it seemed like a good time to take a look at the current state of bicycling in Chicago. (Brian Hieggelke)

Shifting into High Gear: When it comes to big plans for bicycling, City Hall is coasting

Linked On: Chicago cycling rides high with its own social network, Chainlink

Revenge of the Bike Nerds? Even cycling has its “Mean Girls”

Ride a Beercycle: New Belgium Brewing is built on the happy union of cycles and suds