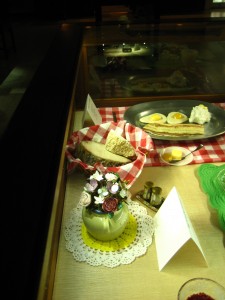 Sure, you can get a meal at the Lizzadro Museum of Lapidary Art in Elmhurst. The menu includes everything from light snacks to traditional sit-down meals, though nothing is edible.

Among the large collections of ivory cameos and elaborate Chinese jade carvings that comprise the museum is one peculiar display: rocks shaped like food. The late lapidary enthusiast Sylvia Josefeck’s collection of various rocks and minerals cut and polished to resemble a day’s worth of meals, the “Rock Café,” offers visitors of all stripes something of a novelty in light of the more traditional stone pieces.

The “Paul Bunyan breakfast” feaures two generous slabs of bacon made from marble onyx, sunny-side-up eggs from marble, and grits (with butter, of course) from aragonite. Next on the menu is a midday snack consisting of feldspar cheese and seed-pod chocolate cookies, along with a very appetizing Mexican onyx fruit salad. And then there’s dinner. The most elaborate meal of the group includes meat carved from petrified wood, jasper spinach soufflé and Petoskey stone mushrooms. To top it all off, there are even sides of black onyx caviar with quartzite crackers and jello cubes of Illinois flourite.

If the very notion of this screams kitsch, so be it: even the museum’s director Dorothy Asher concedes that the exhibit is not something to be taken seriously. She acknowledges that Josefeck’s “Rock Café” project has been criticized during prior exhibitions for being “too whimsical,” calling into question the distinction between art and craft, between art and hobby.

People of all cultural backgrounds have been working with stones for ages, but lapidary’s popularity as a hobby grew in the United States in the 1950s. It proved so popular that even though proper equipment was not available at the time, enthusiasts, or “rock hounds,” willingly made their own. These hobbyists never sought critical or financial success, nor to make a serious impact in the art world, but simply to have fun.

Lapidary declined in the 1980s when assembly-made items became readily available. Decades later, technology still dominates, but lapidary survives, as does the debate between art and craft. “Lapidary borders on craft,” Asher says. “[Craftsmen] are artistic. Do you consider a jewelry maker an artist or a craftsman? People like it—who am I to judge?” she asks.

In recent years, Asher says, though lapidary has been widely recognized as a legitimate art form, there is no simple way to classify who is involved and why or even how they go about creating pieces. There is a wide array of processes and items, but Asher suggests that an “innate connection to the natural world” unifies people regardless of interest, ability or approach. This, coupled with the resurgence of popularity in stone jewelry, has contributed to an upswing in lapidary’s overall popularity, which may or may not bring it to larger audiences in the years to come.

Asher knew Josefeck and her “Rock Café” through attending rock and mineral exhibitions. After witnessing the overwhelmingly positive response from the public, she offered to display the collection in the Lizzadro museum. She says that Josefeck created the piece without artistic pretense. But her appetite for whimsy is undeniably crafty. (Emma Ramsay)