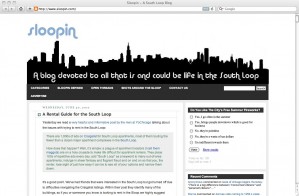 The blog is the medium of the modern age. Often and stereotypically it can be a highly individual form of expression—a single person laying out their thoughts, emotions, pictures, or what have you. But there’s another kind of blog, a community-minded organ of hyperlocal news and opinions: the neighborhood blog. In some cities these blogs are a dime a dozen, but unfortunately in Chicago they’re few and far between.

Neighborhood blogs are a great asset for those areas lucky enough to have them. They keep neighbors abreast of local goings-on that metropolitan newspapers can’t help but overlook, and they do it at a speed that community newspapers can’t hope to match. Some are partisan, like the inflammatory Hyde Park Progress, which posts both neighborhood news and tirades against local NIMBYs. Others are more apolitical, like Uptown Update, which sticks mostly to development updates, crime reports, events and other news of local interest. But they all help foster a community in what could otherwise be just a collection of people, streets, and buildings.

It’s not easy to keep up a neighborhood blog: it can be a thankless task, requiring frequent updates and a comprehensive knowledge of the area. Whether run primarily by one person (like the South Loop’s Sloopin), a group (like Hyde Park Progress), or a local institution (like Buena Park Neighbors), a neighborhood blog is a challenge, and many stop posting after only a few weeks or months. Back of the Yards, for example, has seen several neighborhood blogs spring up and drop away, most recently the Marshfield Tattler, a promising one-woman blog whose last post was over four months ago. But if a blog can manage to survive the difficult initial months, a dedicated readership often appears to support the blogger with tips, photos and feedback, making the job easier and more sustainable.

Chicago has a ways to go to catch up with cities like New York and Washington, DC, where it seems like the majority of neighborhoods have a self-appointed chronicler. To see if your neighborhood has a blog, ask around or try a search on Placeblogger, a collection of “blog[s] about the lived experience of a place.” It’s somewhat frustrating to use and includes more than just neighborhood blogs, but it’s the closest thing there is to a directory. If you can’t find one and you’ve got some time on your hands, think about starting one up yourself. It takes work—but then, building a community always does. (Sam Feldman)