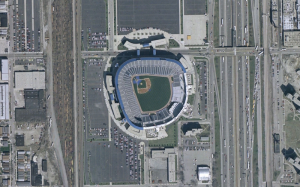 In the last decade, Bridgeport has emerged as one of Chicago’s most diverse neighborhoods. But the rainbow blossoming there has gone largely unacknowledged, and may even be threatened, by purported egalitarians who continue to stereotype Bridgeport as the racist backwater it once was.

In 2008, a DePaul University study listed Bridgeport as one of Chicago’s four most diverse neighborhoods, characterizing its demographics as “extreme diversity.” That promising designation arrived thanks not to the hipsters who have pushed the frontier of gentrification south from Pilsen but thanks to a spiral influx of people of varied race, class and orientation, who seem to have imported not only difference, but tolerance.

Chicago Public Radio touched on the story briefly last November, telling it through the eyes of one resident, Diana Pando:

“Bridgeport is best known for the White Sox stadium, political clout and a steady Irish population. But in the last five years this working-class community on Chicago’s South Side has shifted from majority white to majority minority. It’s not just the mix of Hispanic and Asian residents redefining the neighborhood, there’s also a budding art scene, funky restaurants and new condos.

“For some Chicagoans bigotry has long been synonymous with Bridgeport…. Years ago, when Pando’s family was told to leave Bridgeport because they were Mexican, Pando says her parents did move them away. They were afraid. But eventually they came back. She says the blatant racial tension she experienced as a child is gone. Her block is also full of diverse families.”

In 2004, I moved to the diverse neighborhood I had seen before and after White Sox games so I could live in an affordable flat with a backyard, close to both the Loop and the University of Chicago.

In my first year there, the White Sox won the World Series, their first in eighty-eight years. As the team progressed through the playoffs, fans who had been bracing themselves for disappointment began to fill the streets after each victory.

On the night of the ultimate victory, Chicago Police closed highway access and major intersections into Bridgeport, sealing the neighborhood. As a result, the thousands in the streets that night, all night, were definitively local.

And those crowds could not have been more diverse.

When in the history of the South Side had such an enormous and diverse group of people celebrated together in harmony? The answer has to be never. Earlier celebrations—such as the V-Days of World War II—occurred in a more rigidly segregated city.

Nonetheless, something was missing that night: there were no reporters collecting comments (I was very off-duty), no press photographers snapping candids, no news helicopters hovering overhead.

Chicago’s mainstream media rarely cover the South Side except through crime reports, and while a few news crews headed to U.S. Cellular Field—Univision was most active there—they did not venture west of the viaduct into the area many still consider the baddest part of town.

If your eyes don’t see the present, it’s easier for your mind to stay in the past, and that may explain, in part, why old narratives overshadow Bridgeport’s new reality.

A few years ago local newspapers reported that two garbage containers had been set afire behind Chinese-owned businesses in Bridgeport, speculating—because it was Bridgeport—that the fires were racially motivated. And maybe they were.

But the stories lacked an important detail: dozens of garbage containers had been set afire throughout the neighborhood for at least the prior two years, without regard to race.

Another example: In 2007, police raided the Printers’ Ball at the Zhou Brothers art gallery in Bridgeport, ousting a crowd of writers and magazine publishers, what one writer would describe as people “of a certain demographic… a strand of literary types, a subsection of scenesters, certain recurrences of facial hair, boots, straps, tattoos.”

Those scenesters were not the stereotypical objects of persecution in Bridgeport, but when it came time for that writer to record the event in a lyrical essay he titled “Don’t Go Back to Bridgeport,” Spencer Dew evoked the neighborhood’s stereotypes:

“I arrived early, to Bridgeport, this chunk of small-town Indiana transplanted west of the remnants of Bronzeville. I walked down 35th from the Red Line, past the stark, burnt-out looking hull of Comiskey, down broad and empty streets, storefronts giving way to miniature lawns giving way to storefronts again, past a police station where young black guys were being led inside, handcuffed, by old white guys. This is Bridgeport, I thought.”

I don’t doubt that Dew saw young black guys being led into a police station, handcuffed, by old white guys. That same scene plays out every day in every Chicago neighborhood where young black guys haven’t been excluded a priori.

But Dew’s use of that scene invokes prejudice toward Bridgeport and exploits centuries of racial prejudice against African Americans in service to “scenesters” who suffered nothing more than a busted-up party.

And what about Diana Pando? Does she live in a “chunk of small-town Indiana” that, as Dew describes it, “smelled like my grandmother’s old house, like ribbon candy gone solid in the glass bowl, like plastic sheeting over the couch”? Do Bridgeport’s Asian and African-American residents live in Dew’s grandmother’s house?

Dew excludes Pando from his vision of Bridgeport as effectively as the racists who chased her family from the neighborhood in the bad old days.

Reports like these—so common in Chicago media—try to keep Bridgeport in the mold it has broken. They threaten to inflame racial hatred in a neighborhood where a fragile peace has blossomed.

This isn’t to say the media should not report on racial incidents in Bridgeport; they absolutely should! But they should neither propagate racism where it doesn’t occur nor exploit historical suffering for selfish ends.

I’ve heard Bridgeport called racist so often that I’ve become shy about telling people I live there. Or I tell them defensively, or I awkwardly construct sentences that reveal the ethnicity of my neighbors, hoping facts planted in the listener’s mind will tilt against ignorance there.

What is happening when people who deplore racism paint a whole neighborhood with one broad brush?

A prejudice is a preconceived belief, opinion, or judgment toward a group of people or a single person because of personal characteristics, according to Wikipedia’s useful definition. “It also means a priori beliefs (without knowledge of the facts) and includes ‘any unreasonable attitude that is unusually resistant to rational influence.’”

After hearing prejudiced comments about Bridgeport, I would return to my neighborhood shocked to a heightened awareness of race there. And what did I see?

My building is owned by the Negróns. Downstairs live the Velezes. My neighbors to the north are the Liangs. An apartment building to the south houses the whole rainbow. Across the street: Tam, Martinez, Garrity, Tucker, Barbara, Rosaldo, Reyes.

Often in the mornings I see a young white man wearing the uniform of the South Side—jeans and a hoodie—neck tattooed, hair cropped so short that anyone with the typical prejudice toward Bridgeport would label him a skinhead, surely, except that he’s holding the hand of his tiny daughter, who is black, as they walk to Dunkin Donuts.

Some people have progressive views about equality, but live where they never have to practice them. Bridgeporters practice harmony in diversity every day, which strikes me as a greater accomplishment.

This is good news, but it’s not the dawning of the Age of Aquarius. Bridgeport has a long way to go. African Americans are underrepresented. People from different cultures could be friendlier. Men must show more respect to women.

And there is always danger of a setback, an ugly incident, against which we must remain vigilant.

There are still racists in Bridgeport. I have heard racial slurs mumbled in bars and shouted from cars. But those dinosaurs are outnumbered now, and ojalá, they are vanishing.

Once they’re extinct, Bridgeport will be more tolerant than those who look down on it. I have seen African Americans escorted from Lakeview because they did not dress or behave in the style of the dominant culture. I have witnessed the palpable tension between the two cultures that divide Hyde Park, which claims to be “a model of integration,” but which records—in its police logs—what Richard Wright called “a war that never ends.”

Where can we live in innocence?

In Bridgeport, at least, a diverse community can fight for its extreme diversity, displacing its ugly history with a lovely future. It will only help if all Chicagoans are tolerant enough to allow the possibility.