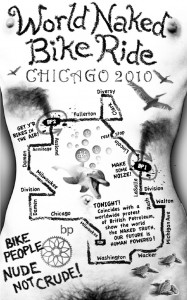 It was late and I was tired and cranky, as I rather reluctantly drove a stranded friend to her downtown hostel when my desire was for home and bed. I had just attended the opening of the Green Party’s new Chicago headquarters in Logan Square, and had been exhilarated by the energy and sense of community flowing in the humble storefront on Fullerton. But I had used up my finite supply of sociability, and looked forward to a quick trip to the Loop and then blessed rest.

It’s in your weak moments when the city turns against you. I and my even more exhausted passenger found ourselves in a hopeless gridlock at North and Damen; making a U-turn, I tried Division Street going east, but the results were no better. Ashland south—sadly the same. Grand Avenue east—finally, despair and surrender to fate. I had become an involuntary participant in the World Naked Bike Ride-Chicago. Motto: As Bare As You Dare. Once-familiar streets had turned into postmodern cattle crossings, blocked by a monster herd of flesh-baring cyclists, mainly but not exclusively of Gen X vintage. Most wore a little something—thongs, cardboard beer cases, body paint—but a significant minority were as naked as the gnats they resembled to my fatigue-heavy eyes, as they flashed en masse through the traffic lights. And as though possessed of some diabolical collective psychic ability, the snaking line of riders seemed to intuit my path and destination, foiling my every attempt to outflank it.

So I had plenty of time to ponder my first experience of this annual ritual, begun here in 2005. As its title suggests, the Ride is part of a worldwide “movement,” launched in Spain in 2001   and dedicated—according to the Chicago Ride’s website—to “the dual purpose of bringing attention to people-powered transport and promoting positive body image.” According to organizers, the 2008 event had set the record with approximately 1,700 cyclists. I wasn’t counting, but after my hour-plus drive from Bucktown to Wabash and Congress, with my idling 1994 Oldsmobile belching out greenhouse gases, the depth of my impatience suggested an even larger attendance.

Even at the moment, I wondered whether my sharp and growing annoyance was a depressing sign of advancing fuddie-duddiedom. But I had felt no such symptoms during the Green housewarming. I now suspect it was my sense that I had been cast as the hapless straight man in the script—a gas-guzzling, BP-apologizing square opposed to pedal-powered transport and afflicted with negative body image and God knows what hang-ups besides. And a mere hour earlier at the Green event, I had been counted among the virtuous. A hard fall, and a rapid one.

What in the name of Lady Godiva was going on here? Is the Ride protest, performance art or frat-house prank? If the participants really are “celebrating freedom from oil, and the beauty of people,” why did the mood seem to me less celebratory than passive-aggressive? If it is a teaching moment, why were no leaflets passed out or posters displayed to the trapped and baffled motorists? And if it is basically late-spring hormonal hijinks, as the event’s gestalt suggested, why the political freight? The bare-bodied procession seemed cloaked in mixed messages and legal camouflage. As a Ride Rule notes, “For First Amendment protection, maintain the message: ‘less gas more ass,’ ‘burns fat not oil,’ ‘nude not crude,’ ‘no concealed weapons,’ ‘naked is how vulnerable I am sharing roads with cars.’”

While the Naked Ride bills itself as a clothing-optional early June version of the regular Critical Mass event, which deliberately clogs city streets to raise consciousness about bikers’ rights, it lacks some of Critical Mass’ authority-defying edginess. The Ride’s Web site expresses its “boundless sincere gratitude” to Mayor Daley and to the Chicago Police, “for their tolerance and tacit facilitation of this ride happening safely.” It is a semi-official event, a socially sanctioned venting of energies and impulses that might otherwise take less manageable form. Perhaps the mayor hopes it will evolve into a tourist event—a small-scale Mardi Gras in his bread-and-circuses regime. Corporate sponsorships may not be far off, with big opportunities for purveyors of baby powder and other anti-chafing products.

Obviously I cannot speak for the individual riders, all of whom have their own motivation for participation. But what seemed missing to me from the event as a whole were the elements of inclusiveness, awareness and commitment—the qualities that distinguish a political gesture from an aesthetic one. Lady Godiva’s risqué ride is remembered a thousand years later because of the intimacy of the sacrifice, and the way the villagers transformed her private shame into communal dignity by averting their eyes. But in a popular culture defined by exhibitionist celebrities and a Peeping Tom media, the very concepts of shame and dignity have nearly evaporated, and nothing is at stake. There are simply the hip and the lame, and from the outside, the Ride appeared very much about underscoring that divide.

Biking through city streets wearing only body paint does indeed require a certain attitude, especially on the part of older and less prepossessing riders. But on this mass scale, the action becomes an anonymous, risk-free and highly administered form of anarchy. Participants are bound by six pages of rules, tips and FAQs—including such ambiguous guidelines as, “ABSOLUTELY DO NOT visibly use alcohol.” One wonders who these tightly grouped, visibly well-behaved subversives could offend, as they wend their way through Chicago’s cooler neighborhoods. I sensed a wish to provoke—but also to have that provocation cheered and approved of.

The Web site notes that “this is a non-sexual event protesting both oil dependency and repression of the natural human form.” Beyond the obvious question of how these two points mesh, there is also the issue of what sort of society the organizers see around them. Is it one of corseted Victorians tragically unaware of the body’s subtle splendor, or of ad-saturated, gym-going wannabe hunks and hotties? It is not old-fashioned inhibition that drives this era of the spectacle—it is the culture of narcissism, which turns the world into a stage for the performance of the attention-craving self.

Yes, biking is good, the body is wonderful and BP is evil incorporated. It takes a kind of genius to transform these messages into something a bit snarky and self-righteous and unsettling. Chanted by the demographically well-sifted, dare-to-be-bare riders, they sounded to me like hipster shibboleths rather than unifying themes. There is a difference between activism and acting out, which cannot be concealed even by the most punful slogans or best-designed websites.

Naked bikers describe the event, according to the website, “as a transcendent group experience, personally transforming, and beyond superlative.” But when they come down to earth, they will notice that nothing around them has changed, and no real community has formed. Maybe that’s what I was picking up at the various blocked intersections—that I was unwilling witness of a ride to nowhere.

It’s a shame that there are no public transportation options between Logan Square/Bucktown and the Loop, forcing you to drive your gas-guzzler to a Green Party event. Drive on, brave environmental warrior.

Looks Hugh Iglarsh is a cager driving to nowhere. As always in a hurry to make it to the red light. Jealous that other “green” people are really trying to do something much more tangible in bringing attention to our ecological predicament. Sitting there in traffic all smug unaware that driving promotes drilling for oil and that the people who participated really have formed a growing lasting community of people dedicated to bring a message out year after year. Someone in this community told me it is not even worth the time to make a comment, but I feel its… Read more »

Activism in and of itself is a narcissistic act. It’s one person or a group of people saying, “this is the right thing to do follow my/our example on to how to live.” This is the first year I’ve done this particular ride and yes, it’s a spectacle. Yes, it is meant to grab people’s attention. People have many, many reasons why they ride; some are there to protest and others because they like to be naked, but at least we’re doing something. To state that there is no sense of community makes you sound more guilty than anything. You… Read more »

This piece is littered with gross inaccuracies and faulty assumptions, bizarre perceptions and conclusions, fluffed with cherry picked web quotes, pretentious and simply bitter.
Even the fundamental perspective is comically flawed, that the writer was delayed while driving his gas guzzler back from a Green party meeting.
I’m told he interviewed a participant who said Gandhi would be proud, and was given ride coordinator contact info but never bothered.
You’ve covered something wonderfully successful with many thousands participating world-wide, with hack reporting and a regressive angle.
Frankly, that it appeared in print reflects poorly on NewCity’s standards.

mr iglarsh has clearly offended many many green minded, bike riding, handle bar eating (avoid the cager salad, its toxic, but try the bike chain burger, superb and garnished with offal) birkenstock wearing, progressive thinking, forward looking and completely neutered enthusiasts. the fact that these rather sad examples of offended slacker is what passes for current “progressive” will tell you where the county now rests, squarely in the hands of tattoo’d, stapled, and nowhere. lets ride!!!!

To those of you offended by Hush Iglarsh’s musings on the difference between symbolism and activism: I whole-heartedly applaud your efforts to promote biking. Publicizing true alternatives is terrific — not so, hostile comments here that display an entrenched sense that you are Right. Is “cager” a better epithet than “tree hugger?” Effective, behavior-changing action is the goal, not polarizing expressions of self-righteousness. I’m also less impressed by the “any publicity is good publicity” mindset than by more effective efforts that demonstrate how greener choices can be made. Research supports this. (See “National Wildlife,” 5-14-10, “Which psychological hurdles are standing… Read more »

Dear New City: I know you don’t pay Hugh Iglarsh to write for you, but I DO hope that the McCarthyistic attack by the organizers of the event to which he gave relatively mild critiquing has not harmed your ardor for his witty words. I was the passenger Hugh had rescued. I was injured. Hugh knew I wanted to cover the Green Party event but would be unable to do so unless his much maligned older car spirited me to where I was staying. As we were stuck in traffic (and yes, we did turn off the engine–others did not–which… Read more »

Mass bicycle rides inevitably inconvenience motorists. Typically, the response of the riders to complaints about gridlock is: “We are NOT blocking traffic! We ARE traffic!” But this was an unusual article, so my friends should be forgiven for responding somewhat unusually.

You’ll have to admit, I think, that it is unusual, to say the least, for a self-professed Green to vent Road Rage at a Green protest.

Mr. Iglarsh is far more naked than the naked riders.