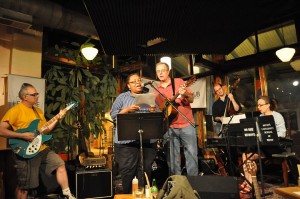 It may be fashionable to say that print media is dying, but one group that is dedicated to keeping the industry alive, and to helping the casualties along the way, is the Chicago Headline Club, which recently held a fundraiser at  Rogers Park’s Heartland Cafe. The event was bursting with music and the roaring din of old friends, in the hopes of raising money to benefit unemployed journalists, going toward freelance costs and additional training.

This community isn’t one in which a journalist “leaves the profession and no one thinks about you,” Franklin says. The camaraderie amidst the dark-rimmed glasses and button-down shirts confirmed this.

Overall, the event raised about $1,000, according to Franklin. “We knew we wouldn’t make a lot of money, but it will help in small ways,” he says. “We don’t have a lot, but it sent the message that we care.”

A hootenanny picked up towards the end of the night, with journalists singing along, aptly, to “Lean On Me.” A bidding started, for the chance to sing the song on stage, trying to raise some extra funds on top of the door donation. “Twenty-five dollars for the state of the future of journalism,” called out one of the performers. (Lindsey Kratochwill)