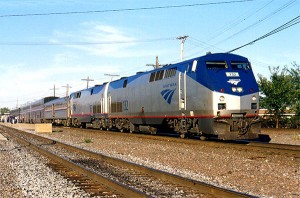 Descending the stairs to the base level of car number three, a westward traveler is in search of a pick-me-up. He surveys the potential snack items sitting in reserves against the silver walls and looks to a nearby piece of paper for prices. “What’s in a snackbox? Oh, never mind, I see. What’s good here?” he asks the cafe car attendant. He’s placed his choice in good hands.

The attendant vouches for the sizzling temperature and tang of the meatball sub, and he promises the fulfilling size and satisfying flavor of the teriyaki beef bowl. Though likely embellishments on all fronts—the foods are pre-packaged and cooked by microwave—the descriptions are enticing. “I think I’ll just grab some chips,” says the guest. He pays, adding a “Thank you, sir” and opens his Lay’s.

“Call me Johnny. I’ll be here if you need anything else.”

Johnny will be in his steel-wheeled cafe for three days and two nights. On board the California Zephyr, he mans the train’s cafe from Lake Michigan to the Pacific Ocean. His cafe is small. Its three tables sway with the train making the consumption of Johnny’s items a precarious exercise. “I got a fresh shipment this time. Won’t run out,” he tells a fellow crewman as the train approaches Naperville. Johnny says he will often sell his lot of sodas or sandwiches or beer before the Zephyr pulls into Emeryville, California, after the fifty-two-hour ride. The round trip takes almost a full week. He stays a night in California before his eastbound Zephyr and cafe head back to the Midwest where he’ll have a week off before making the trek again.

A customer comes down for two Pepsis. “Where are ya headed?” Johnny asks.

“Oh, you’re with us for a while. Denver. Beautiful city.” The California Zephyr, Amtrak’s number six train, will cross the Mississippi, roll over southern Iowa, and make four stops in Nebraska before it reaches Denver. From there, it continues through the Rockies, makes stops in Reno and Sacramento, and comes to rest near the Bay. The number six route is the most scenic to Johnny’s seasoned eyes, the jewel of the rail. He’s worked them all: the historic City of New Orleans, the Seattle-bound Empire Builder, and other shorter and less ambitious routes.

Holding his young son, a father comes down for a treat to share. “How are you? Come on in. Hey, you got the big guy with you. It’s a kid’s paradise down here.”

The boy, about three, scouts out the sweets. “Dad, is this the snack caboose?”

Johnny laughs. “Snack caboose. Yeah, you could say that.” They choose a candy bar and some pretzels and head back to their car as the train careens through early-summer cornfields. “He was a talker, man. Just like my grandson. Never stops talking.”

There are old, out-of-commission cars in the yards of Illinois farmhouses. Over the plains and under an overcast sky, the Zephyr slows its pace slightly. The tracks briefly parallel I-80, a partner in westward travel. Near Princeton, Illinois, the train crosses underneath the cars, vans and semis on the interstate, and the two routes leave each other’s sights.

A man with an empty beer can greets Johnny with a silent hello. “Another cold one?” He serves the traveler in a baseball cap his beverage and says, “I’ll see you around.” He likely will. On a train that explores the better part of a continent, there are surprisingly few places to go. The cafe car, Johnny’s car, whatever one’s final destination, is a destination for all. Johnny puts on a fresh pot of coffee, and the train pushes onward. (Andrew Rhoades)