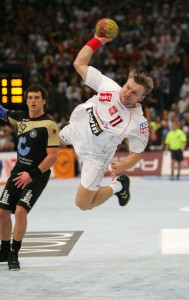 So you finally decided to get really into the World Cup, and that’s all you’ve watched, talked about and dreamed of for the last month and a half. But it’s over, and now you’re asking yourself: how can I feign, and then acquire, a deep passion for Euro-centric sports that take place in less-than-four-year cycles? Without resorting to cricket? Have no fear, handball is here. Literally. This Saturday, Poland and Germany, ranked fourth and fifth internationally, will play on neutral turf at the UIC Pavilion. Olympic handball is like basketball, but you don’t have to dribble and there’s a goal instead of a basket. More importantly, there’s no cap on the number of fouls—“faults”—a player can make each game, which are used strategically to stop the flow of the offense. Lauren Harrington, a spokesperson for USA Team Handball, says it’s going to be a close match, despite Poland losing their captain to an eye injury in a match versus Croatia last week. The “Battle of Chicago” match isn’t just for show, either—it takes place on the 600th anniversary of the Battle of Grunwald. Poland slammed Germany then, but this match is up for grabs. Go early for food, a beer garden, a club match and German and Polish music. July 17th at the UIC Pavilion. Doors open at 10:30am, match starts at 1:05pm. (Ella Christoph)