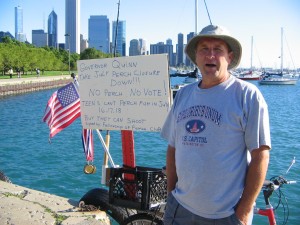 I’m in search of fishermen as I walk along the lakefront in the early morning, watching the blue-gold waves echo the light breeze that would disappear as the sun rose higher. I want to discover the hidden stories behind the men who wake up at two in the morning to get to the lake by four, as attracted to the peace and cool of the late-night-early-morning lake as the fish they catch.

I see just one fishing pole hanging out of the back of a bike next to a sign that reveals I am a day, not just a few hours, too late for the fishermen. “Governor Quinn,” it reads, “Take July perch closure down! No perch, no vote! Teens can’t perch fish in July. 16, 17, 18. But they can shoot. Signed by: Fellowship of Fishing Club.”

“Jumbo Jimmy” Baczek sits on a bench by his bike proselytizing to passersby. “I woke up this morning at two o’clock, can’t go perch fishing, got pissed off, and made myself a sign,” he says.

In Illinois (unlike neighboring Wisconsin and Michigan), perch fishing, the main attraction for fishermen who stay on land to fish, is banned in July. Perch used to be over-fished and the ban was established in order to allow for population regrowth, but some believe it’s time to replace the ban with a limit.

Baczek believes politicking is behind the ban. “[Fishermen] can tell what a whopper story is and what a whopper story isn’t, so they can tell what’s bullshit,” he says. Baczek says he gave “a politician’s response” to a reporter from the Sun-Times who asked him about the ban earlier in the week. “When I said that, I said to myself, you’re an asshole,” says Baczek, who decided to take a firm stance with his “one-man protest.”

Baczek says he’s hoping to gather support and go to Springfield to ask for the ban to be lifted, or at least be moved to the spawning season in early spring. Baczek’s son, who is 18 years old and also a fisherman, suggested civil disobedience: illegal perch fishing. “I told him, that’s going to cost a lot of money to get you out of jail,” says Baczek.

Fishing may seem like an unlikely hobby for teenagers who love to sleep in on Saturday mornings, but Baczek says it’s a perfect fit for young people like his son. “They don’t even go to bed. They’re up till four in the morning, then they go perch fishing, then they go to bed,” he says. Perch fishing could keep teens busy and out of trouble during the summer, he believes, if only the ban were lifted.

A Chicago Park District security car drives by. Baczek, who is retired from working as an arborist for the CPD, says hi to the ranger and tells him about his protest. “They should take that law down,” the ranger agrees.

Baczek says he’ll keep the sign in his bike this month as he bikes around the city with his chocolate lab, Star. “They can’t arrest me, I’m Jumbo Jimmy!” he says. (Ella Christoph)