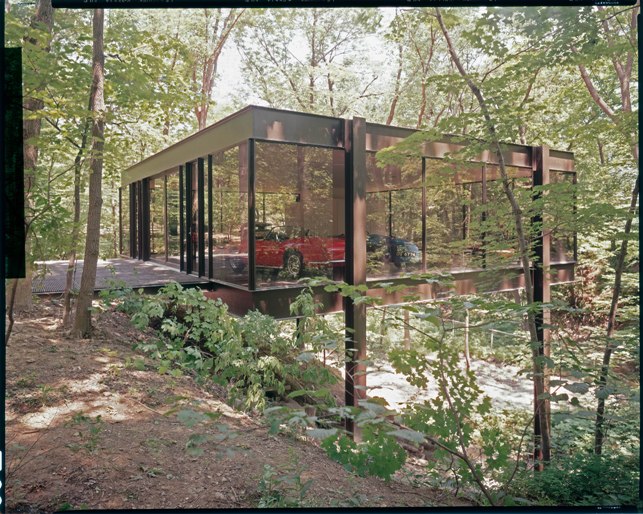 In the late eighties and early nineties, hip, affluent trendsetters rediscovered the aesthetic of mid-century modern homes and flocked to Palm Springs in search of homes designed by Albert Frey, Richard Neutra and their peers. It was a godsend for the homes, which were “somewhat disheveled-looking, and worn out,” says Joseph Rosa, director of the University of Michigan’s Museum of Art.

Mid-century modern in Illinois began attracting buyers as well, and now many of the most notable homes in the area are safe thanks to owners who have landmarked and poured thousands of dollars into their homes. One landmarked home, the Ben Rose House in Highland Park, gave preservationists a scare recently when it went up for sale when a rumor started circulating that there were plans for demolition.

The building, designed by Mies protégé A. James Speyer and David Haid in 1953, has a cantilevered pavilion where the Roses stored their car collection. Two landmarked homes in Highland Park have been demolished, and preservationists were concerned it would happen again.

If you’ve seen “Ferris Bueller’s Day Off,” you’re more familiar with the Rose House than you think. In the film, Cameron Frye sends his father’s Ferrari flying through the window of the home’s pavilion and it crashes down into the ravine—a forty-foot drop. Haid told director John Hughes he could prevent the pavilion from being damaged by the scene by making some minor structural reinforcements—and then charged him $25,000 for the service.

The home is currently for sale for $1.65 million, and it’s historically staged with the belongings of the Roses, who travelled around the world collecting art, statues and textiles. The real estate agent for the property, Meladee Hughes, says a building like this would typically sell in a couple days, but due to the economy, buyers are holding off. It took two months to stage, and walking through the space is a strange time warp—it’s a flashback to the home of an exceptionally forward-thinking, well-travelled fifties family.

Meladee Hughes is still looking for a buyer, but for preservationists, it’s a relief to hear that the mid-century modern icon is safe from demolition. Or destruction—fingers crossed that whoever ends up buying the property won’t have kids like Ferris or Cameron. (Ella Christoph)