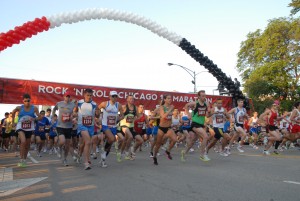 A rock ‘n’ roll lifestyle doesn’t usually mean hitting the hay early on Saturday nights, but it would be a wise decision for those running in this Sunday’s Rock ’n’ Roll Half Marathon, which starts at 6:30am. If you’re there to support a friend or enjoy the music, well then, don’t think twice, it’s all right to stay up late, just as long as you wake up early, too—the post-race concert in Grant Park is free and open to all, and begins at 7:30am with opening act Hello Dave, followed by the main act Five for Fighting. The Rock ’n‘ Roll Half Marathon features live Chicago bands for each of its 13.1 miles, which cover downtown Chicago and the lakefront. It won’t be a monotonous run, with music ranging from classic rock ‘n’ roll to blues, jazz, folk music and even Irish bagpipers. Adding live music, says event manager Shaba Mohseni, brings “a whole new meaning to doing a running race.” Last year’s debut event (they bought out the long-established Chicago Distance Classic) sold out with 18,000 runners, and this year’s race is sold out as well, despite adding 7,000 more slots. Last year, Marty Mardirosian’s daughter ran the half-marathon, and he cheered her on. Mardirosian says watching his daughter run, and the title of the race, got him interested in playing—Mardirosian’s band, M&R Rush, had a hit song the summer of 1980—“Rock ‘n’ Roll Chicago.” Now Mardirosian will be motivating thousands of runners around the nine-mile mark with covers and original music. Needless to say, you can leave your mp3 player at home for this run. (Ella Christoph)