by Brian Hieggelke
August 2, 2010Filed under: 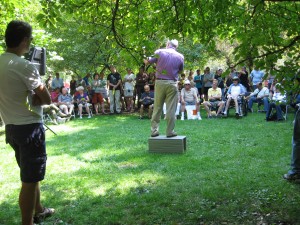 During a debate entitled “Students are Americans, Too!” two of the youngest speakers, or “bugs” of the day—and in the end, the winners of the Dill Pickle Award, presented to the best soapbox orator of the day—Pam Selman and Evan Ribot discuss the rights of student journalists. As they tell their story, a heckler in the crowd shouts, “But print journalism is dead!”

Another shouts back, “That’s why they’re up there talking! They’re trying to resuscitate it!”

While many of the bugs prepared in advance, researching and pouring their thoughts and feelings into a sheet of notes or script, the hecklers are flying by the seat of their pants.

“Oftentimes I agree with the conversation or the thing they are saying. I say it’s fun just to mix it up a little bit, that’s the spirit of the Bughouse Square Debates,” Bryan Young says. This is his second consecutive year at the event and he says sometimes people in the crowd aren’t in on the joke.

“I think a couple of people were taken aback that you would actually stand up and say something like that,” Young says. (Lindsey Kratochwill)