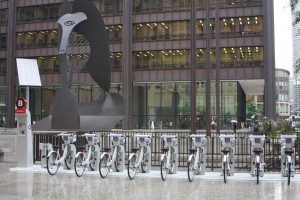 Chicago? Chicago’s new B-cycle program (chicago.bcycle.com), operated by bike-rental company Bike and Roll, receives zero dollars in public funding. It launched July 30 with 100 bikes at six kiosks, mostly downtown along the lakefront. Memberships are $35, with the first hour free and every half-hour after that $2.50, up to $40 a day, encouraging shorter trips. Getting a widespread, affordable bike-sharing program in our flat city is still an uphill battle.

“We think it’s an awesome idea,” says Julie Hochstadter, who helps run the online bike community website The Chainlink. “But we are a little hesitant because of the way that it’s started because they’re only having them downtown.” She wonders why there aren’t smaller stations throughout the city, allowing people to head from, say, Lakeview to the West Loop. Bikers on the website commented that downtown is also especially difficult biking terrain—perhaps left to seasoned Chicagoans who own their own bikes.

B-cycle Chicago owner Josh Squire admits the program is starting out small, but says that doesn’t mean Chicago can’t become a bike capital one day. They want to prove to Chicago it’s time to hop onto the bike-share trend, which hit the streets most notably in Paris in 2007, with 10,000 bikes at 750 kiosks, and has since grown to 20,000 bikes and 1,639 kiosks. It’s grown in popularity throughout Europe and cities in the US are now joining their ranks.

But the Chicago Department of Transportation (CDOT) says that while it would love to have a heavy-hitting bike-share program, the funding will have to come from elsewhere. They’re looking for a nonprofit or corporate sponsor or federal funding to back the program. The “current economic environment might not be the best environment to set aside city funding for a program like this,” says CDOT spokesperson Brian Steele. 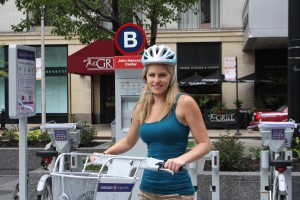 CDOT and the Chicago Park District have worked with B-cycle to establish kiosks on public land (there’s a station at Buckingham Fountain, and another at Daley Plaza). It’s possible more stations will go in at places like Union Station as well as in neighborhoods outside the Loop to make the program more convenient for commuters, but it’s all dependent on the popularity and financial success of the current program.

Squire, who also owns Bike and Roll, is optimistic the program will start out as a success among locals and visitors looking to take a leisure ride, say from the Museum Campus up to the John Hancock Center. Ideally, there will be kiosks throughout the city, but he thinks the smaller program will be enough to get people, and investors, interested in expanding.

Hochstadter says the bike community is less optimistic. “A lot of cyclists who are bikers and seasoned commuters don’t think it’s going to work” because it only includes parts of downtown, she says. “In our opinion, it’s a recipe for disaster.”

Steele says the city hopes to learn from the mistakes of other cities in order to avoid problems with theft and vandalism, and he says the pilot program will help the city evaluate what challenges—like the level of theft—they’ll have to face. Some of the newer programs, like the B-cycle one, have GPS sensors implanted in the bikes, which also have distinctive frames—you can bike, but you can’t hide. Squire says this should drastically reduce theft problems.

The city will keep a close eye on the outcome of the B-cycle program. “There are just so many issues that have to be addressed before the city launches the program,” Steele says, saying funding is just one of a myriad of concerns. A couple years ago, CDOT put out an RFP for bike-sharing programs, but only received two proposals. They’re hoping that as bike sharing evolves, there won’t be as many hurdles and more institutions (corporate, nonprofit and government) will be interested in funding it, since the city isn’t. “I guess I would view bike-sharing technology no different than consumer electronics,” says Steele. Like an older iPod, he says, an early-adapter bike-share program “still works fine but it’s not nearly as advanced or as sophisticated as the newer programs.”

While Paris struggled with theft problems, Squire says they started off on the right foot, placing thousands of bikes on the street overnight. “That’s the way to do it,” he says. He’s disappointed the city wouldn’t help him do that, but has his fingers crossed the program will catch on even with so few bikes and stations, and is looking to expand if the ninety-day pilot program is successful. But without public funding, B-cycle will need corporate sponsors willing to host kiosks for about $500 a month in maintenance fees.

“The idea is to have a larger bike-sharing program in the City of Chicago,” says Steele. But, he says, “There still are myriad questions and issues that need to be addressed before moving forward.” (Ellla Christoph)