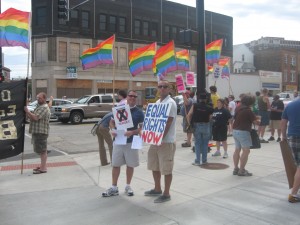 Despite the modest turnout—around forty, according to Thayer—the crowd that’s gathered outside the new Wilson Yard location Saturday morning is in high spirits. A good number of people are lining the curb with full-sized rainbow flags. Others mill around with posters. Motorists are regularly honking with enthusiastic support. The weather is nice; someone’s making water runs to the nearby Aldi. After about forty-five minutes of chatting and informal chanting—“Taste the rainbow, Target! The gay dollar is powerful!” protest wit Mark Schmieding shouts into the street—Thayer rallies the troops. “We’re gonna do a picket line now, and then… we’re gonna have cake!” he says, leading the group in a circle near the store’s entrance. The chants vary, from the classic “What do we want? Equality! When do we want it? Now!” to the punning “Don’t shop at Target! We will not be targets!” Eventually, hunger and hoarseness intervene, and Heintz cuts the cake.

The thing is, people love Target. Even people picketing outside Target love Target. “I’m really bummed about this,” says Schmieding. “I love Target. It’s killing me… where else do you buy bug spray?” When Thayer addresses the crowd, he echoes the sentiment: “After it [the donation] happened, my heart was broken. I love Target.” Yet no one gathered here will be delving into the dollar bins today, thanks to the company’s recent $150,000 donation to pro-business PAC MN Forward, an organization that has made substantial contributions to Emmer’s campaign. (Best Buy, another Minnesota-based company, also contributed to MN Forward, but never having had Target’s devoted following, their gift hasn’t attracted the same ire. Besides, someone points out, “you can get that stuff cheaper online.”)

While Target CEO Gregg Steinhafel issued an internal memo apologizing to the store’s employees for the contribution, the corporation has made no move to get the money back. Until they do—or, if that’s not possible, until they balance out the damage with an equal donation to an organization to a gay-positive group or candidate in Minnesota—protesters say they’ll be boycotting the store. For CPS teacher Carrie Maxwell, though, an equal donation isn’t enough. “If they can’t get it back,” she says, then Target needs to give double—“$300,000 to pro-gay anything in Minnesota.”

Not everyone, however, is on board. “You know they’re gay supportive!” says one woman, who identifies herself as a lesbian before crossing the picket line. Historically, that’s been mostly true, agrees Schmieding, citing Target as “one of the better corporations when it comes to policy,” recent events excepted. For him, as well as for Maxwell, today’s protest is more about the Citizens United Supreme Court decision than it is against the store itself. (In January, the Supreme Court ruled that corporations can donate unlimited funds to political campaigns, and in early July, Target became one of the first businesses to exercise the right.) Making an example of Target, protester Tom Sobie explains, will “put a lot of corporations on notice.” With the store now in a no-win situation, unable to repair the current damage without potentially alienating more conservative shoppers, he’s hoping corporations will think twice before making political contributions. “We just want them to know we’re watching,” Schmieding adds. (Rachel Sugar)