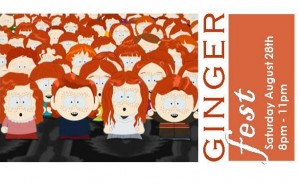 The onetime popularity of the sultry seductress on “Gilligan’s Island” notwithstanding, the redheaded among us are apparently neglected and poorly treated, for one reason or another. Accordingly, Mrs Murphy and Sons Irish Bistro, 3905 North Lincoln, (773)248-3905,  has decided that it’s high time to do something for the forsaken ones, when it throws its “Ginger Fest” party on August 28, 8pm-11pm.

“As it so happens, our general manager here has red hair and largely feels under-appreciated, I suspect,” spokesperson Sue Pitkin says. “So we decided it was a good idea to have a celebration of it.”

This will be the first Ginger Fest, but depending on the success, Pitkin says there could be another in the future, “if we get a lot of redheads, real or fake.” (Both will gain half off the $20 admission being charged the blonds and brunettes, which includes select beer, wine, mixed drinks and appetizers.)

But whether a firey mop can be found upon your head, or you just wish it did, with live music from The Boils, the atmosphere will surely be lively. “Any excuse is a good excuse for a party, isn’t it?” Pitkin says. (Lindsey Kratochwill)