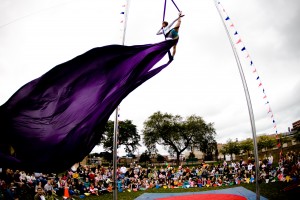 A weekend stroll in the park will be transformed into something much more whimsical this month. Park-goers around the city will be treated to jugglers, contortionists, acrobats and musicians, bringing the circus outdoors and to the community.

Circus in the Parks began four years ago, in a very grassroots way, with just one park. O’Conor says that the district was slowly trying to renovate the parks by asking the community to contribute.

Eventually they bought a URL (circusintheparks.com), and with help from the Park District and volunteers, the circus expanded to include both Welles and Chase Parks, but this year is the greatest undertaking, with five parks involved.

Circus in the Parks is a unique fundraising model to help renovate Chicago’s parks, and with the expansion, the funds will be divided evenly amongst the parks. In the past four years, the event has raised $80,000 for the two original parks.

The show includes two acts, with an appearance by the Chicago Boyz and even a retrained pit bull from the Humane Society. The Midnight Circus is responsible for the talent, and its founders put together a set designed to touch the hearts and minds of all age groups.

“Anyone who sees it is brought to tears in the beginning. They capture what we once had in our youth,” O’Conor says. “It”s a jump back to your past.” (Lindsey Kratochwill)