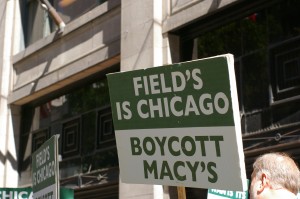 Chicago lost an international icon in 2006 when Marshall Field’s was officially changed into a Macy’s, a company largely associated with New York. And despite the time that has elapsed, to many Chicagoans, including Jim McKay, this change was an insult that will not go on without a fight.

So fight is what they have done, even as the years have worn on. McKay’s Field’s Fans Chicago (fieldsfanschicago.org), a non-sponsored, non-commercial and non-profit group that is not affiliated with Marshall Field’s or any of its previous owners, began organizing and sharing its opinion on the matter as soon as the change was made. Field’s Fans has been keeping its ear to the ground to keep up with the general opinion of Chicago shoppers on the question at hand.

McKay says they only want to keep going as long as it’s what Chicagoans want. This year, their polling showed that four out of five shoppers preferred Marshall Field’s to Macy’s, and 81 percent of those polled on Michigan Avenue and State Street still wanted Marshall Field’s back, which was up from last year’s 78 percent. The group polled 521 random shoppers, asking them each three questions to gauge their shopping habits, which have been charted each year.

The Marshall Field’s name is a symbol of local pride and promotion of local culinary arts, fashion and culture to the group. Macy’s isn’t just a name change, but also a regime change, to the Field’s Fans. McKay says that there have been cutbacks, and events have changed to a more celebrity focus, rather than focusing on fashion. 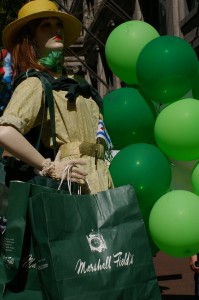 Once each year the group meets with the shareholders of Macy’s in Cincinnati (where it’s headquartered), whom he says have been receptive and willing to hear the group’s ideas.

“We are amicable to working with Macy’s, with using their resources, but to continue on with the Marshall Field’s name,” McKay says.

Clad in green and carrying signs, the group met for a rally this Saturday, commemorating the original name and demanding that Macy’s change the name back to Marshall Field’s.

McKay marched with about thirty people, declaring “Bring Field’s back to State.” Dressed in a suit, he led the group in chants, with a megaphone and in a march from the mannequin dressed all in green at the corner of State Street and Washington and down the block, in front of the building that bears a plaque with the Marshall Field’s name, but now houses Macy’s Chicago flagship.

“[We know that it’s] not the most serious cause in the world—there are much more serious—but we participate in those too,” McKay says. (Lindsey Kratochwill)