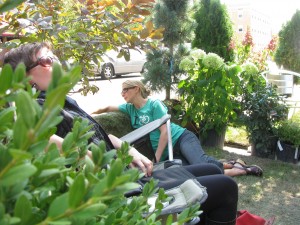 Two hours is all it takes to turn parking spaces into a temporary park. Motivated by both the PARK(ing) Day events in San Francisco, and locally by last year’s parking-meter deal, this is PARK(ing)’s second fourth year of bringing the urban park to the people.

Matt Nardella, principal architect for Moss Design and organizer of the event, says last year’s turnout lead to the growth this year. They are expanding their “oasis,” which is biker and pedestrian friendly.

“Last year we only had three spaces. This year, we’re trying to take as much of the block as possible,” Nardella says.

The park atmosphere will spring up in a place that is usually used for stowing cars. It’s the hope that all the things that would happen in a park will happen in this pop-up version of a park. From people picnicking, working, to bringing a guitar out to play some music, it’s bringing people together to enjoy the weather as it begins to turn.

“We’re planning to make it look like a park and not a parking space, [and] all the things that come with that,” Nardella says. “We’ll lay out some sod or turf and trees, we’ll most likely have a hammock or two and camp chairs, a few boulders and maybe even a water feature if we get ambitious.”

PARK(ing) this year has a special meaning to those involved, because it’s somewhat of a launching point for a project that Moss Design is starting. The project has just started, but will contain components of sustainable-design features that the neighborhood would like to see.

“We would love to do it every year and make it bigger every year. The grand idea is that this turns permanent,” Nardella says.

Moss Design wants to inspire patrons to think about the temporary nature of both the park and the parking spaces, and hopes that people can think forward to what could be made of these parking spaces, if there weren’t any more cars on the road. This year, nationally, PARK(ing) day has grown to sixty participating cities, with parks sprouting up in Lincoln Square and Streeterville as well. (Lindsey Kratochwill)

[…] Fox Chicago is planning to do a live report on site Friday morning.  Also, some press from Newcity and Roscoe View […]