by Brian Hieggelke
October 12, 2010Filed under: 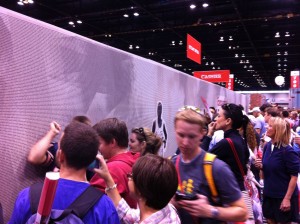 While the race commands the attention—this year’s Chicago Marathon had the added charm of a symmetrical date, 10-10-10—the commerce goes down two days prior at the marathon expo, filling the cavernous space of one of the McCormick Place halls. All 38,131 runners have to visit the expo in order to get their bib numbers,  timing chip and t-shirt, the latter of which is strategically placed at the very back of the expo hall, like milk in a grocery store, meaning you cannot avoid at least some of the vendors if you want to get your swag.

Of course, no one really wants to avoid them, so immersed have they been in the world of running these last few weeks. The expo is open to the public but save for guests of entrants, a handful of aspirants and a few freaks, attendants are running 26.2 miles the next day and, in spite of expert admonishments against spending too much time on your feet at the expo, few can resist the magic combination of running and shopping. So what are they buying?

Cars and bank accounts: Major sponsors, like Bank of America and Volkswagen have huge pavilions, the latter filled with shiny new vehicles. They give out perks like preferred corral starts for customers and blank signs, with ample logo exposure, to convert cheering spectators into unpaid marketing ambassadors.

More races: Distance runners are addicts who organize vacations around runs. Thus marathons in places like Arizona, Miami and even exotic locales like The Great Wall of China are represented.

Gadgetry: Humans like to believe that the latest invention will solve their problems, and runners are no exception. Thus various inventions of varying levels of hyperbole take their place, whether it’s special shoe insoles or waterproof running belts to hold your phone.

Healthcare: This is not the place to sell the benefits of diet and exercise, but rather treatment for the pains that tomorrow will bring. Thus massage therapy, chiropractors and assorted other recovery vendors make hay with this crowd.

Charity: Running is a solitary endeavor and can make its practitioners feel a bit self-absorbed. Running for a charity is a way to create team spirit, as well as lessen the guilt. Plus it’s a way to score entry into otherwise hard-to-enter races, like New York and London.

Candy: No one calls it candy, of course, but after the proverbial marathon “wall” was discovered to be  due to a shortage of glycogen, the products came out of the woodwork. At the expo, samples abound, like a bakery giving away free food, and the lines can be long to try all the flavors of Luna Bars, for example,  or the latest Shot Bloks. (Who wants the taste of margaritas when they are dying at mile twenty? Ooh, I do, I do.) Jelly Bellys even has a product called Sport Beans and it’s delcious—tastes just like, um, Jelly Bellys.

Speaking of the wall,  clothing vendors have the really epic presence, like New Balance,  Saucony and ASICS, though none compare to Nike, which has tricked out a venue bigger than many sporting-goods stores to hawk its official line of Chicago Marathon gear for those for whom the pain and a medal is not enough. Lines are long but moving briskly, except along the wall that Nike has constructed. Up close, the wall is revealed to contain an alphabetical list of every entrant, in very small type, and runners crowd to find their names and photograph it for posterity.