by Brian Hieggelke
November 1, 2010Filed under: 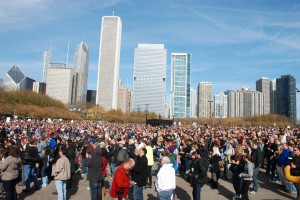 Poor Aaron Weaver. He’s only trying to spark some lighthearted local comedy into Grant Park, but he just can’t stand up to the jumbotron.

The Chicago crowd, chock full of avid “The Daily Show” and “Colbert Report” fans, chuckles along with the couple-hundred-thousand people convened on the National Mall in Washington, D.C. After Yusuf Islam (better known as Cat Stevens) twangs the first chorus of his 1971 classic anti-war tune “Peace Train,” the sound snaps off.

But seriously, who can compare to powerhouse satirists Jon Stewart and Stephen Colbert?

“Sane people don’t come to a rally for sanity. Come on, we’re all a little insane here,” jokes Weaver. “A rally where people are watching TV? Now that’s insane.”

He could be very funny—even a bit Mitch Hedberg-esque, at least in his delivery—but not on a large stage at an outdoor rally in front of 2,000-some people who apparently gathered solely to watch television for three hours on their feet.

Many people might be here solely for Stewart and Colbert, but more are here to support their movement, however exaggerated it may be, and not just the people behind it.

To the serious: “Freedom isn’t free. Pay your taxes.”
“Single payer healthcare for all!”
“Agree to Disagree.” 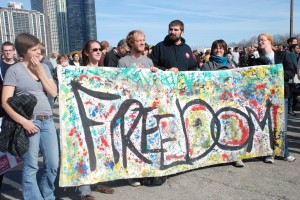 Volunteers with mayoral- and governor-candidate buttons ask the youthful—but scattered with middle-aged and even elderly—folk, “Are you registered to vote in the city of Chicago?”

The Chicago rally’s Facebook page clearly enumerated the program’s schedule: seventeen different speakers/artists over the course of three hours, with five-minute live feeds from D.C. at 11am, 12:25pm, and 2pm. Of course, visitors to the webpage had to click “read more” under the information tab on the left to view these details, but in McMahon’s defense, satellite rallies in other cities across the country—Seattle, Los Angeles, Austin, Boston—also included local programming.

Though interrupted at extended intervals for the likes of Green Party gubernatorial candidate Rich Whitney, to comedian Bryan Babylon, who summoned President Barack Obama to the stage via his imitation voice as if he were a “Saturday Night Live” regular, to jazz musicians Danny Draher at the conclusion of the rally, the Chicago crowd seems utterly dismayed that the D.C. version is not their own.

“We’re here to create our moment,” explains McMahon mid-set. The remaining crowd members, many of whom departed long before she spoke, were noticeably more interested in the onstage presence following the organizer’s reasonable remarks.

The D.C. rally glimmers muted on the jumbotron. Yet the locals support their locals.

Sporting patriotic colors and a grow-green sign, Peter Gizyn supports her rationale. “She had the program planned the way she wanted, and people didn’t really know what to expect.”

As Stewart exclaims at the D.C. rally’s end, “I’m really glad you guys are here, even if none of us are quite sure why we’re here.” (Kristine Sherred)