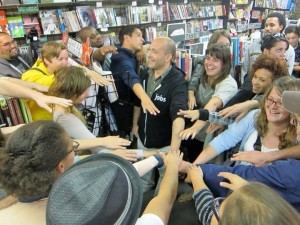 For only the second time in sixty-five years, Chicago will find itself running Daley-less. Though the city’s 2011 mayoral election has received ample national attention since Mayor Daley announced he will not run for a seventh term,  Chicago A.D. (After Daley) hopes to create a local conversation. Founded the day after the mayor’s announcement, Chicago A.D. is an open Facebook forum to share thoughts, ideas and opinions on the candidates.

Chicago A.D. began at a reading by Billy Wimsatt in support of his new book “Please Don’t Bomb the Suburbs,” says Harish Patel, the group’s founding member. About fifty people joined the conversation that night at Quimby’s bookstore and carried it into cyberspace.

“We are very excited about the opportunity to create a new city and want to make sure that various different voices are heard in the creation of a just, peaceful, vibrant, educated and healthy Chicago that works for everyone,” explains Patel.

Chicago A.D. does not endorse any one candidate but rather offers Chicago’s citizens and voters a space to converse freely without fear of partisanship. Its mission stands to formulate the people’s vision of a continuing bright and prosperous Chicago After Daley.

The group has promptly posted announcements on their public wall for each new candidate and their websites, upcoming town hall meetings and political gatherings, as well as links to other groups active in the pre-election conversation. Any overtly partial post by group members is met by an objective “tell us why you support him or her” response.

“There’s a constant dialogue on the page, which is cool,” says Patel. “Followers [all over the political map] are commenting, posting their own thoughts and asking questions. We want to keep this diversity of political thought and allow it to guide the conversation.”

With more than 550 voices so far, Chicago A.D. brings levelheaded election news and updates to a single streamlined feed. Visit their Facebook page to become a member, or email [email protected] with “sign up” in the subject heading to receive their newsletter. (Kristine Sherred)