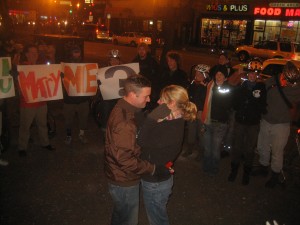 It’s a frigid Friday night and forty bicyclists have convened on Polish Triangle, aka Bum Island, the three-sided plaza at Division/Ashland/Milwaukee, populated by homeless guys and a hotdog vendor, and carpeted with pigeon droppings. It’s a bigger crowd than usual for the Wicker Park Critical Mass, one of several “mini masses” on the first Friday of the month, that also take place in Pilsen, Evanston and Oak Park. A female cyclist dressed as Santa passes out fleece balaclavas, while a dude on a recumbent in a spiky orange motorcycle helmet puffs on a pipe. Then a young couple, Aaron and Katie, ride up to the plaza and stand before the group, in front of the Nelson Algren Fountain. Aaron presents a small red box to his surprised girlfriend and drops to one knee as five of his helmeted pals unfurl signs reading “KATIE / WILL YOU / MARRY / ME ?” She runs forward and kisses him passionately as the crowd erupts with cheers, honking bike horns and ringing bells. After passing around bottles of bubbly, the mass of bicyclists saddle up and pedal off into the sunset. (John Greenfield)