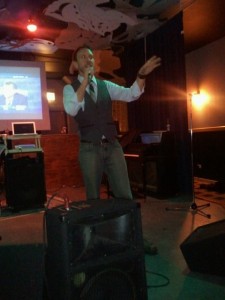 Fifty to sixty Green Party supporters and a few of the candidates themselves, gathered at Cole’s Bar in Logan Square election night to watch the results come in, and the news was not good. They had gotten trounced in their races for Illinois Comptroller, Cook County Board President and Illinois 4th Congressional District, to say nothing of Senate candidate LeAlan Jones. Their best hope had been Jeremy Karpen, a 29-year-old professional counselor and social activist running against Democratic incumbent Maria Antonia “Toni” Berrios for Illinois State Representative for District 39. He had already run against her in 2008, gaining 21 percent of the vote despite being massively outspent. Endorsed by The Chicago Tribune, The Chicago Sun-Times and the Chicago Teachers Union, he’d been showing strength in the polls—enough so that national blogs like The Huffington Post had taken notice and were commenting on the possibility of an electoral upset. But as Jeremy takes the stage to address his supporters around 9pm, it has become clear that the race has been decided—once again, for the incumbent.

“Obviously this is not the speech I wanted to make,” begins Karpen. “But what we did today is an incredible example of grass-roots democracy. This was about what it means to run a democracy, to build a real political alternative.”

The crowd responds with enthusiasm and applause. They may have lost, but they do not necessarily feel defeated.

When Jeremy makes an offhand remark about how it looks like “we’re not going to have a real party tomorrow,” there is a palpable shift in mood. Because while no one had given the major Green candidates, Jones for Senate and Rich Whitney for Governor, any real chance to win their respective elections, a lot had actually been at stake. Running against Blagojevich in 2006, Whitney astonishingly gained over 10 percent of the vote. That 10 percent had given the Green Party “established party” status in Illinois, meaning that, legally speaking, they were completely equal to the Democrats and Republicans. The status had given them much easier ballot access (established parties in Illinois only need 5,000 signatures to make a ballot for statewide office; non-established and independent candidates need 25,000), had allowed them to hold primary elections, and gave them, they had hoped, credibility.

They needed Whitney to get at least 5 percent of the vote statewide to maintain that status. They did not.

“It’s been hard,” says Karpen. “Everything we did was trying to combat the idea that the Green Party is a bunch of hippies and that we’re a waste of their vote. People were still asking, ‘Are you the Tea Party candidate?'”

Perhaps the biggest obstacles to the Green’s success were their own principles. Greens will not take money from organizations, PACs or companies of any kind. Berrios’ campaign took in just under $100,000. Karpen’s? $30,000, with not a single donor over $1,100. Berrios’ donors are largely pharmaceutical PACs and companies like Comcast, Walgreens and Humana. Karpen’s? All “actual individuals.”

“When you look at (our donors), what stands out is the sheer number of $10 donations, $25 donations. If we had won, there wasn’t a single organization or corporation we would have owed,” Karpen says.

Indeed, the Teachers Union, having given him their endorsement, offered to also donate money to the campaign, Karpen says. He wouldn’t take it.

“Organizations don’t vote,” Karpen says. “A difference is lost when your donors aren’t really human. If I [were elected] I would have real people to answer to.” (Jonas Simon)