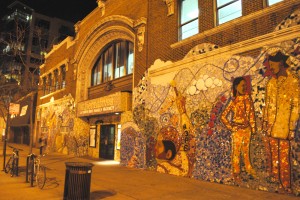 The gymnasium of Edgewater’s Alternatives, Inc. on a Tuesday night buzzes with happy activity. Off to the sides of the room, kids play ping-pong, get help with homework or work on their DJ skills at a live spin station. Meanwhile, on the floor, small clusters of young people in sweats and sneakers form a number of separate break-dance circles. They practice routines one at a time, giving each other feedback and teaching new moves.

The open gym is a production of Connect Force, a program which combines hip-hop culture with social justice, providing education and positive lifestyle alternatives to kids in this at-risk community where gangs like the Stones and Vice Lords actively recruit. Started by Justin Grey in 2003, Connect Force operates an afterschool program twice a week, offering mentoring and life-skills classes.

The cornerstone of Connect Force, however, is its hip-hop training, which encourages kids to participate in different aspects of the culture, such as break-dancing, music production, graff-art (graffiti and murals) and verse writing.

A thin man in his late twenties with long, dirty-blond dreadlocked hair and a neat mustache, Jesse Livingston started DJing for Connect Force as a volunteer and since 2005 has been working for the program as its DJ instructor. What does he think brings people into the program? “It’s a combination of things with the kids because we get a lot of local kids,” he says. “So it’s really more of a safe space and they come to just have fun. And fortunately that’s part of hip-hop, so we don’t necessarily pressure them to practice an element of hip-hop right away, but we do encourage it.” 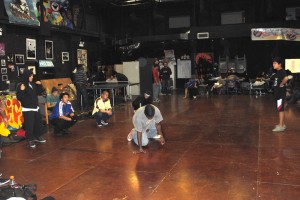 Livingston recalls that his involvement with Connect Force began serendipitously enough as he was acquainted with Grey’s girlfriend at the time through a band he used to play for. He says that he was spurred to participate because of a similar program that was available to him when he was young, which inspired him to get into music production. “It was a really righteous opportunity to complete that circle, to give back the same opportunity I was given as a kid,” he says.

This cyclical aspect seems to be a recurring theme in Connect Force, as many of the instructors started off first learning their skills in the program. Wayne Cauthen has been coming to Connect Force since the fall of 2006, after a break-dancing competition at the center caught his attention. He now works for the program, doing youth development and drug awareness.

Cauthen says Connect Force has inspired him to pursue teaching as a career. He acknowledges that the center is necessarily limited in its resources and how many people it can help at any given time. But Cauthen stresses that while “it is only one building and one neighborhood,” nevertheless, “the people that work here, and the youth that we touch, spread it, spread the positivity and spread the news about the place.” (David Wicik)