by Brian Hieggelke
November 23, 2010Filed under: 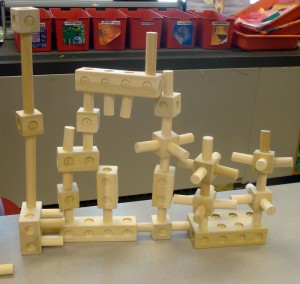 If urban woodsman chic and the enduring popularity of raw lofts has shown us anything, it is the extent to which aesthetic tastes run back to the rough elegance of primitive design. And thanks to one local artisan, there is no reason that your carefully “un-furbished” interior-decorating scheme need not extend to your childrens’ toys.

After getting his degree in fine arts from Columbia College, Eric Siegel was looking for a project. When his wife became pregnant with their first child, his mind turned to all things baby and soon enough he had the idea to start his Tree Hopper line of infant and toddler toys.

“We were on a road trip out west and we stopped by this toy store in San Francisco and they had some cool wood toys and that just got me thinking. And when I came back and looked into it more and looked around at toy stores, I saw that there would be a niche for these kinds of toys.”

The hallmark of Tree Hopper is Siegel’s wooden block sets, which can be built into a wide array of configurations with their connecting rods. Siegel says that the idea for the product came about when he wanted to make something for his nephew’s Christmas gift last year.

Siegel makes all of his Tree Hopper toys in a woodworking suite he shares with several carpenters and fellow tinkerers in a re-purposed factory building in Chicago’s Austin neighborhood. The shop is strewn with odd bits of construction material, and one can see a variety of projects in various states of completion. In one bay, a pump organ has been custom-fitted with baby grand strings. 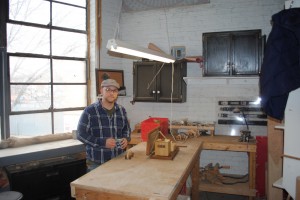 In Siegel’s area, stacks of mixed poplar and recycled hardwood boards line the walls. Siegel says he uses primarily poplar (locally sourced from Indiana) in his toys because it is light and highly renewable. “Poplar is one of the fastest-growing trees on the planet,” Siegel notes. “It’s the only tree that if it were cut down and replanted the same size tree could be cut down again in one (human) lifetime.”

But Siegel’s eco-consciousness extends beyond the wood used in his products. Tree Hopper toys are bound with EcoGlue, a water-based adhesive containing less than one-percent volatile organic compounds (VOCs), and are finished with the same organic flax seed oil many use everyday as an omega fatty-acid supplement. Even the tables and benches in his work area are constructed from reused material.

But Tree Hopper toys, more than being green, are simply beautiful. Siegel says that design is very important for him, and that as he prototypes new products for the line, such as a kid-sized wooden camping set, he is looking to make objects that marry playability with looks. Which, as the father of an infant, he can say is quite important. “Especially when you have toys scattered all around the house, you might as well have something that looks nice.” (David Wicik)