by Brian Hieggelke
November 30, 2010Filed under: 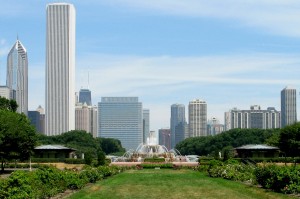 If you have ever gone to Lollapalooza, attended a concert at Millennium Park’s Pritzker Pavilion or simply strolled through its elegant gardens, you should consider joining Lawrence Okrent and the Friends of Downtown this Thursday, December 2, for a brown-bag luncheon presentation about the origins and rich history of Grant Park.

Urban planning and zoning expert Okrent (who prefers to be called Larry) has more than forty years experience navigating the history and peculiarities of Chicago land development. Not to mention that over his career, Okrent has amassed an extensive archive of aerial and historical photographs of Chicago. Who better then to illustrate the complex history of Grant Park.

Okrent can tell you, for example, that the land that is now Grant Park was once just a gap of water standing between the natural Lake Michigan shoreline and the elevated Illinois Trestle just to the east. And you might be interested to learn that that little water gap was first filled in with rubble from the Great Fire or that the park didn’t attain its characteristic landscaping until the 1920’s and thirties.

Okrent’s interest in urban planning and the history of land use lies in the human dimensions involved in the creation of urban space. “Cities don’t just happen,” Okrent observes. “They reflect the ideas of people who build things, imagine things, who decide what qualities they want that environment to embody.

“The Grant Park story is a great story, and a few people know it, but many don’t. There is a process to all this.” A process, Okrent believes, that is important for ordinary citizens to know about, as it shapes the world they inhabit on a daily basis.

The planning expert maintains that people who know the history of a place will be more likely to be engaged in planning its future. “People who are not involved in this process are not focused on change as much as people who are are focused on change… It’s important to have a broader base of information upon which to build an opinion so that it’s not as one-dimensional.”

A corollary goal of Okrent’s talk will be tracing the way investment in public-works projects can pay big dividends. Okrent argues that too much focus is on the cost of public works, without sufficiently balancing projected private investment in development which can occur as its result. Grant Park provides a great example of this point as residential development south of Roosevelt and commercial development north of Randolph have both been catalyzed by investment in the park’s improvement. (David Wicik)

“The History of Grant Park” with Lawrence Okrent is part of Friends of Downtown’s Brown Bag Luncheon series and will be held December 2, 12:15pm, in the Millennium Room of the Chicago Cultural Center, 78 East Washington.