by Brian Hieggelke
December 9, 2010Filed under: 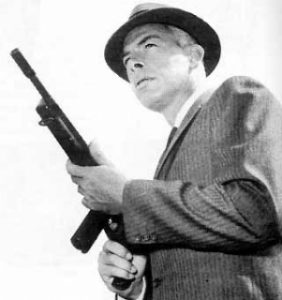 Ever drive through the Loop or down Michigan Avenue and wonder what it looked like fifty years ago? Watch “M Squad.” The film noir television show, which ran from 1957 to 1960, starred Lee Marvin and featured guest appearances by “future” movie stars like Charles Bronson, James Coburn and Burt Reynolds. Based on the career of a true Chicago detective, it takes the daily cases—extortion, murder, counterfeit rings—of Chicago’s crime world during the 1950s and brings them to life. But the real star is the streets of Chicago. Driving through The Loop circa 1959, your eyes are greeted by a sea of neon. Blinking and flashing with dancing lights, the signs tell us that this is the place to see jazz, drink martinis, buy fancy suits and even take a peek at a hoochie coochie dancer. As Marvin cruises down Michigan Avenue we see no John Hancock, no Water Tower Place, no Willis Tower and few fancy shops. Instead, the Wrigley Building, The Prudential Building and The Allerton Hotel dominate the landscape. To make things even better, rumor has it that since Mayor Richard J. Daley did not approve of Hollywood’s depiction of the Chicago crime scene, it was all shot on the sly. Looking more closely, the guerilla filmmaking becomes obvious. We see Marvin flicking a cigarette butt on the street with the Museum of Science and Industry behind him, but there is nary a car or person to be seen. Filmed at 6am on a Sunday when nobody was around to catch them perhaps? But the best shot may be the opening sequence, which was shot on Lower Wacker Drive beneath the Wrigley Building. With Count Basie’s jazzy theme song blaring in the background, Marvin peels up in a 1958 Ford and jumps out of the car, gun drawn, about to apprehend a would-be bad guy. Great jazz. Film noir. Vintage TV. The city back in the day. Nothing better.