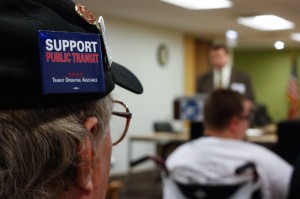 On an icy Monday night, a handful of citizens braved the cold to visit the Loop office of the Regional Transit Authority, which sets the budgets and provides oversight for CTA, Metra and Pace. They’re here for the last of several public hearings on the RTA’s 2011 financial plan. Several of the attendees are transit activists who show up regularly for these kind of meetings. There are also a few people with disabilities here, and there’s a sign-language interpreter at the front of the room.

Joseph Costello, the RTA’s mild-mannered executive director, starts the hearing by explaining how the sour economy has impacted the three transit agencies. Reduced consumer spending means the RTA’s largest source of public funding, a 1.5 percent share of Cook County sales-tax receipts plus .5 percent of receipts from the five collar counties, dropped from about $750 million in 2007 to roughly $650 in 2010. Meanwhile, the cash-strapped state government has been delaying its payments to the RTA, making it tough for the transit oversight body to pay its own bills.

In response to these funding problems, Costello says CTA, Metra and Pace are making financial sacrifices. 2011 budgets are smaller, there have been more than a thousand employee layoffs and, like eighty percent of transit agencies around the country, they’ve cut service and hiked fares. On the bright side, while regional transit service has been reduced by three percent, ridership is only down by one percent, he says.

Although the three agencies will have smaller capital budgets next year, Costello says the RTA is studying the condition of tracks, stations and other infrastructure for future improvements. “The engineers tell us if we were to rebuild our regional transit system from scratch it would cost us $52 billion, so it’s a valuable asset we should invest in and preserve,” he says.

When the floor is opened to comments Heather Armstrong, who uses a wheelchair, says that Metra and Pace offer cleaner buses and trains, and better customer service than CTA. “You should give the CTA train system to Metra and the bus system to Pace,” she says.

Charlie, a senior with a crew cut who’s a member of the transit workers union and the transit advocacy group Citizens Taking Action, says he’s worried about future layoffs. “The union drivers ain’t got no contract,” he says. ‘Will there be three, four, five thousand more layoffs next year?”

The City of Evanston’s Matt Swentkofske says, “Evanston is very blessed to be served by CTA, Pace and Metra.” He asks Costello for help getting three rail viaducts rebuilt in the village. “Let us know what kind of lobbying we can do.”

Kevin Peterson, a young man in army pants and boots who says he’s with the group Citizens Against Terrible Transit Service, rants against faulty fare cards, bus drivers who refuse to lower ADA ramps, and the RTA’s efforts to end the free-rides-for-seniors program. “You guys are supposed to make sure CTA, Pace and Metra get along,” he says. “You’ve been deadbeat parents.” (John Greenfield)