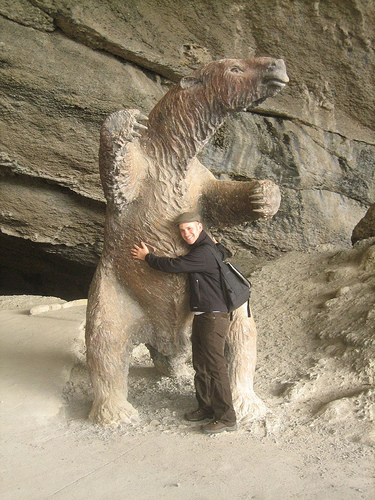 The fruits of my studies included quality time spent in Puerto Natales, Chile

When it comes to learning foreign languages, I’ve been a Jack of all trades, master of none. I’ve dabbled in French, Hebrew, Russian and Japanese, sometimes achieving the ability to hack my way through a conversation with a tolerant native, but never becoming fully functional in another tongue.

One reason Anglophones like me tend to be lazy about learning another idiom is that much of the world speaks English as a lingua franca. But one language that is very valuable for Americans to learn is Spanish, and it will only become more so as the U.S. Latino population grows. It’s especially handy here in Chicago, where more than one in four residents is Latino, many of them recent immigrants.

I made a half-assed attempt at learning Spanish during a one-semester early morning course at the University of Chicago. Although the teacher was a charismatic, funny woman from Argentina, sleep deprivation often led me to nod off in class. Since then I’ve worked a bit with books and tapes, and I got to practice the language during a college road trip in northwest Mexico, and when I was the lone Chicago delegate at the Cycle Messenger World Championships in Barcelona.

But it wasn’t until 2008 when I enrolled at Dígame (“talk to me”) language school in Logan Square that I started making real traction. My girlfriend at the time was working as an English teacher in a town called Puerto Natales in the Patagonia region of southern Chile. I was going to meet up with her to travel the continent for a month and I didn’t want to be totally dependent on her now-excellent Spanish skills.

Camille Martinez, Dígame’s energetic young director, turned out to be a very cool language instructor. We met twice a week with three female students—a lawyer, a dentist and a social worker—for intense but fun hour-and-a-half sessions with lots of conversation and games. My favorite was called “Rate the Fruit,” in which we had to argue the merits of a particular variety of produce en español—we all eventually agreed that the aguacate was king.

The tiny class size and Spanish-only policy ensured that I got plenty of practice speaking, and by the time I flew to South America I felt very confident conducting basic transactions and having pleasant, if slightly inane conversations with locals on buses and boats. It was an awesome vacation filled with sapphire glaciers, snow-capped volcanoes, soaring waterfalls and sensuous tango clubs, marred only by my becoming violently ill after eating a bus-stop empanada.

I’ll admit I’ve gotten a little rusty since then, and I really should take another class at Dígame to keep progressing. But it’s still useful and fun for me to speak Spanish with people I meet in Chicago, whether I’m selling an inner tube to a customer at Logan Square’s Boulevard Bikes, chatting with Beatrice, a Mexico City transplant who works at Revolution Brewing, or rapping with Claudio the tamale guy at the Happy Village tavern. (John Greenfield)