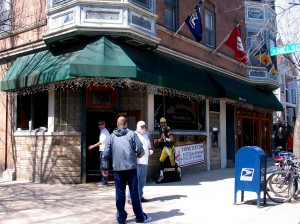 For the past twenty years, a dark scourge has thrived in the heart of South Lakeview, mere blocks away from Wrigley Field. This twisted secret society gathers in the shadows nightly: drinking Leinenkugel, eating pickled herring and participating in bizarre rituals involving Muskies and some sort of card game known only as “Sheepshead.” They proudly call themselves Badgers and Cheeseheads. We know them as Packers fans. And yes, they live among us.

Since 1991, Will’s Northwoods Inn (3030 North Racine) has been the go-to Chicago bar for Wisconsinite expatriates and other assorted Green Bay faithful. Packers games have become such an event there that they even host crowds driving down from America’s Dairyland itself.

“If you just go to some bar in Wisconsin, it’s like going to any old bar here in Chicago to watch a Bears game,” explains Will’s GM Kevin Kruse. “But when you come here, it’s wall-to-wall hardcore fans.”

This Sunday marks one of the most anticipated football games in the history of the world (or, at least, the Midwest), as the Green Bay Packers travel to Chicago to face the Bears in a NFC Championship Game for the first time since 1941, and you can guarantee that Will’s Inn will be serving up plenty of beer brats and fried-cheese curds.

“We had seven to eight hundred people in here [for the Falcons game],” says Kruse. “There was a line outside the door going around the corner with people waiting all the way through the third quarter just trying to get in.”

Kruse is an interesting case—a Chicagoan (born and raised in Wrigleyville, no less) turned Packers’ fan. What, I wondered, could turn an otherwise sane Chicago native to the dark side? Was it brainwashing? Cheese-induced hallucinations? Cade McNown? The answer is far more benign.

“My friends would ask me that all the time,” Kruse says. “And I always say the same thing: I challenge any of you to be here for five years for every game and to be here with these people and not become a Packers’ fan. These are some of the greatest fans in the world.” (Jonas Simon)