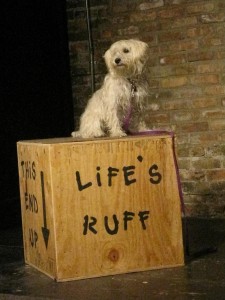 “Life’s Ruff,” a stage performance featuring dogs and their owners in a game-show setting is holding a casting call at Gorilla Tango Theatre, 1919 North Milwaukee, Saturday starting at 1pm. “We’re looking for dogs and owners, people who don’t know a lot about training,” says Dog Saving Network founder Chris Dignan. “We really want to show that anyone can learn how to train if you’re dedicated to it.”

Having an adopted dog is not a requirement, but dogs are expected to be spayed/neutered and vaccinated, and should understand basic obedience skills. Above all, Dignan considers the connection between the dog and the owner: “We’re looking for a dog and an owner that work well together. We don’t care how many tricks they know because we can train them.” He cites personality traits as the most important. “We prefer an attentive owner and an attentive dog, but I’ll work with just about anybody.”

“Life’s Ruff” requires a six-month time commitment, including an eight-week class for positive reinforcement training. The show opens around the beginning of August and runs through September. Dignan mentions dogs spinning wheels for “pretty significant prizes” as one of the show’s highlights. In addition to entertainment, though, the goal is to raise awareness for homeless animals and emphasize the importance of proper pet training: “We help people know what to look for in an adoptable dog, how to match it up with your lifestyle.” (Kristine Sherred)