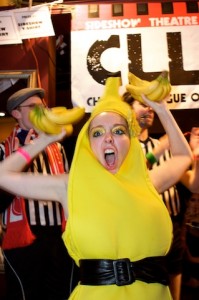 As I make my way through the crowd I am accosted by a petite woman wearing a banana costume and thigh-high fishnets, shouting at me to put all my money on her. She is The Banana Split, and she has come to dominate.

“Potassium gives you strength,” she says, with steely determination. “And I’m full of potassium.”

The Banana Split (a.k.a. Nicole Richwalsky) has a hard night ahead of her. She’ll be competing against such dangerous adversaries as Malice in Wonderland, Babraham Lincoln and Gaga Gunshow to see who will be crowned champion in the eighth title bout of the Chicago League of Lady Arm Wrestlers.

“I’ll do whatever it takes to win,” says two-time CLLAW champion Strawberry Shivcake (or Ellen Wohlberg, 9 to 5). “Whether it’s illegal, stabbing someone, killing someone, bribing someone; bribes never hurt…”

Indeed, the matches haven’t even started yet when CLLAW 7’s reigning champ, The Killer Bee, gets shivved by Strawberry (natch) in the middle of the introductions.

Started in 2009 as a satellite group of the original CLAW (Charlottesville Lady Arm Wrestlers), the Chicago group has rapidly become one of the top Lady Arm Wrestling groups in the nation.

“We started at The Spot, and outgrew that pretty quickly,” says Bruce Phillips, marketing manager of Sideshow Theatre, the group that sponsors the events. “Tonight (at Mystic Celt) we hit capacity, around 300 people, pretty much as soon as the doors opened. We could fill 400 to 500 easy.”

Since starting, they’ve managed to raise over $2,000 for such good causes as Gilda’s Club, Rock for Kids, CAPE (Chicago Arts Partnerships in Education), New Leash on Life and Season of Concern. Tonight the ladies will be wrestling to raise dollars for the Howard Brown Health Center.

“It’s strictly volunteer and it’s strictly for charity,” says Phillips. “And for glory. Charity and glory.”

Not only are none of the wrestlers paid, most of them aren’t even professional (or semi-professional) actors.

“It’s definitely a theatrical event more than an athletic one,” says Phillips. “But we don’t want it to be an improv thing. We’ve got lots of students and just random girls that want to sign up at the volunteer table after seeing a match.”

Aside from the wrestlers and their managers, who are also in costume, the fans are almost as much a part of the show themselves. Medusa Damage’s parents have been spotted at matches wearing t-shirts with their daughter’s visage; The Killer Bee is often flanked by supporters dressed in beekeeper outfits, and before Armageddon takes the stage she is preceded by her entourage—The Four Horseman of the Apocalypse.

“I would say I’ve been following Armageddon since the beginning of time, till the end of all days,” muses Death (a.k.a Allison MacWilliams-Brooks); mainly because of “her passion for decimating all those around her and her unbridled fury and disappointment in humanity.”

All the costumes (and backstories) are provided by the wrestlers themselves, no involvement from the theater. And, unlike professional wrestling, this isn’t scripted.

“The matches are real,” says Wohlberg. “There might be a little, ‘you win this one, I’ll take this one’ in the beginning, but by the third one (matches are best two-out-of-three) you’re really going all out. And the newbies, that’s who you’ve really got to watch out for—you don’t know their strength.”

Flash forward to the end of the night: fourteen wrestlers have now walked off the stage in disgrace. It’s down to the final two—Strawberry Shivcake in one corner and, from out of nowhere, a total newbie in an Asian schoolgirl outfit named Harajuku Ninja (Jennifer Harris, participating in her first ever CLLAW) in the other. It’s best three-out-of-five. They take it down to two-to-two when the judges call for a left-handed match. Referee Richard Douche (pronounced “Douchay” thank you very much) blows the whistle. In the end, it is the newbie who takes the belt. Or in this case, the tiara. (Jonas Simon)