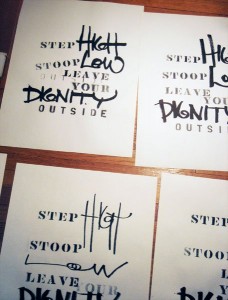 “STEP HIGH STOOP LOW LEAVE YOUR DIGNITY OUTSIDE.” That was the sign posted outside Chicago’s legendary “Dil Pickle Club,” a Bohemian club/speakeasy/cabaret/theater that played host to various radicals, artists, anarchists, authors and socialites throughout the twenties. It was a place for self-styled free thinkers and sexual libertines, one of the few public places in the city where it was okay to be openly homosexual. And while the original club faded into memory in the mid-thirties, its message of political and sexual expression and spirit of meeting high culture with lowbrow is gaining resurgence some ninety years later.

“It was a place where you had hobos next to housewives,” says Fred Sasaki, one of the co-founders of the revived Dil Pickle. “You had doctors and lawyers mingling with tramps and prostitutes.”

The fifth installment of this incarnation of the group, entitled “LOVE/DEATH,” takes place February 10 at The Hideout (1354 West Wabansia). More than just a simple art event, the evening promises live music (with the band weaving in and around the crowd, not on stage), a tattoo artist giving out temps, a Day of the Dead shrine complete with group ritual, a St. Valentine’s Day Massacre-themed photo booth, talks on both serial killers and Precious Moments figurines, and algorithm-aided matchmaking.

The focus of the event is on making attendees a part of the experience, not just passive viewers. “We encourage interaction,” Sasaki emphasizes. “We encourage heckling.”

While this event is “kind of more of a fun Valentine’s Day event,” previous installments have been slightly more provocative, pushing boundaries and making the sexual political. One such event featured a professional escort detailing her trysts in writing and art, along with screenings of lesbian pornography (that is, pornography made “by lesbians for lesbians”) shining out of a Rogers Park storefront into the street.

“For me that’s by virtue political,” says Sasaki. “Even the pinkest of pinkos said, ‘I can’t believe I’m watching this.'” (Jonas Simon)