by Brian Hieggelke
March 8, 2011Filed under: 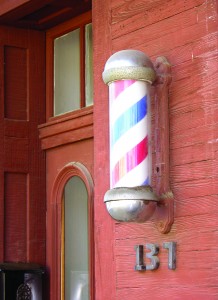 My North Side barber died a few weeks ago, and while I did not know him outside the small orbit of his barbershop, I am moved to write about his passing. Over the course of fifteen years I spent little more than a dozen hours with him. I know nothing of his personal life except that he loved dogs and baseball. Nonetheless, I feel disoriented by the disruption of one of my life’s reassuring routines. I’m approaching forty, and haircuts are increasingly becoming exercises in resource management. With his passing, I am forced to find another barber I can trust to carry me through the thinning, middle years of my vanity.

On television and in the movies, a barbershop is usually depicted as a lively place full of bright, chatty barbers and loitering men who talk about sports, politics, women. My barber was always alone in a shop empty of customers. He was profoundly laconic and as emotionally distant from his client as a man clipping hedges. Yet, his melancholy demeanor appealed to me and provoked existential musings. Why was he so sad? Did he regret devoting his life to the barber’s trade? Was he lonely? Or was he simply thinking about baseball?

He also chain-smoked while cutting my hair. Without ever asking permission (it was his barbershop, after all), he would light a cigarette, place it in a nearby ashtray, and pause for a drag now and then as he clipped. My freshly cut hair always smelled of sour smoke, but I didn’t mind. I admired his old-school disregard for my own comfort. I confess that I once asked him to give me a haircut like Brad Pitt’s. He didn’t, perhaps because he felt he could not pull it off, but more likely because he felt I could not pull it off. This is how it should be with your barber; you trust him not to make you look like a fool even when you demand to look like one. Which is not to say he gave a great haircut. More often than not he made me look like a 12-year-old banker. It didn’t matter. I went to him for pathos, not for style.

A month or two ago I stopped by the shop for a trim. A note on the door read, “Closed for medical emergency.” When the shop was still closed a week later, I reluctantly found a substitute barber at one of those noisy, congenial barbershops I dislike. But as it happened, the gentleman cutting my hair knew my old barber. (As a friend of mine noted later, it is indeed a small barber world.) I was told that for some months my barber had been sick in the hospital with terminal cancer, though not of the lungs as I had suspected. Later I called the hospital. “He used to be my barber,” I told the nurse who answered the phone, “and I want to send him flowers.” “Oh,” she said, “That’s nice.” She gave me the room number. I ordered the flowers online. On the electronic delivery card, I wrote, “Get well soon. I need a good haircut.” I wanted to be lighthearted, but after I read it a few times, it did not seem lighthearted at all. I sent the flowers anonymously.

A few weeks later I saw his name in the death notices. I drove to the shop and saw the sign still on the door, except now someone had scrawled in pen across the top “Not to reopen.” Through the window I saw that everything in the shop sat undisturbed, the bones of a simple life devoted to giving other human beings a decent haircut and a close shave. And yet, surely not so simple, because who among us is ever completely satisfied with the haircuts we get, the services we receive, the things we buy. My barber will be replaced, as most things can and will be. Still, I will miss his long, self-contained look out his shop’s large plate glass windows as he gives me the hand mirror and asks distractedly, “How’s that?” “Looks good,” I would say, with no hint of betrayal.

This is a moving tribute to a figure that many of us have in our lives. My barber has been a young Christian Iraqi who clearly went through very difficult times to come to the US. He is married with 4 kids, and splits the earnings from $5 haircuts with the place where he works. I have often talked with him about Iraq, but clearly only superficially. How can I really have any idea of what he has experienced in his young life? He, like your barber, has a veil of sadness about him and a quiet suffering. He seems… Read more »