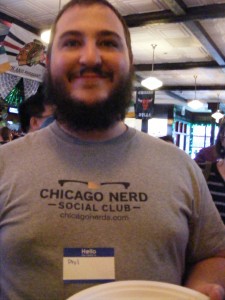 Humans, by nature, are social creatures. We literally cannot exist without each other. When it comes to human society, it’s true: no man is an island.

Nerds are human too. While sometimes confused with reclusive amoebae living vicariously through World of Warcraft avatars, “Nerds actually go out and do things too,” says Kevin Harris, who’s helping hand out slices of pie for The Chicago Nerd Social Club at the second annual Pi(e) Day. Held at Firkin and Pheasant in Lincoln Park, this event celebrates the mathematical symbol with the pastry that shares the same pronunciation.

Rachel Baker, co-founder and brainchild of Chicago Nerd Social Club, greets everyone at the door, distinguishing the nerds from the bar regulars with bright blue Hello-my-name-is stickers. “Did you bring a pie?” she asks her fellow nerds upon arrival. “I have two actually!” exclaims Brittany Zimmerman, who learned about the club at last year’s Pi(e) Day. “Pfff, over-achiever,” Baker jokes. Pies are given points for taste (1 point), presentation (1 point), crust (1 point) and nerdiness (0.14) with a total possible score of 3.14. This pie competition is no cutthroat tearjerker—a savory Moroccan pie wins. The “-off,” on the other hand, is taken very seriously, as four contestants take turns sounding off as many digits of pi as they can from memory, all in a quest to take home a $100 gift card to thinkgeek.com. 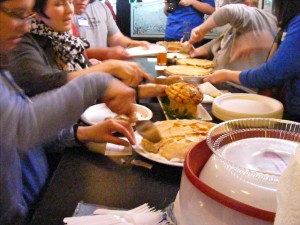 The Chicago Nerd Social Club isn’t usually competitive at its many other events, planned by three Chicago nerds. Baker, along with Jeff Smith and Phil Kalata, started the club two-and-a-half years ago. “I got a postcard from a different social club with a girl in a cocktail dress drinking a martini and whispering in someone’s ear,” Baker recalls. “I thought to myself, I would never go to that.” Baker, wearing a vintage Star Wars t-shirt, points to Jeff and Phil, wearing a Transformers t-shirt and an official Chicago Nerd Social Club t-shirt, and says they bought the domain “chicagonerds.com” in excitement before actually defining their project. The founders quickly decided they would host social gatherings and soon found themselves with more than 600 people on their mailing list and close to 900 following their Facebook page. The club has a regular science fiction/fantasy book club; otherwise, it organizes a small event once or twice a month with different themes. Usually held at a bar or cafe, the gatherings always have a specific nerdy niche. “That is what brings out a lot of us,” Smith explains. “People are into a certain subject and we create a comfortable environment for them.” Past events include: Robot City Workshop, Dungeons and Dragons 101, Nerd-O-Ween, Marvel vs. Capcom 3 Fight Club and Nerd Speed Dating.

Though there is little talk of mathematics this night in spite of the Euclidean theme, the room is abuzz with geeky chatter about comic books and rectangular glasses. The social order is preserved. (Tiana Olenwick)t