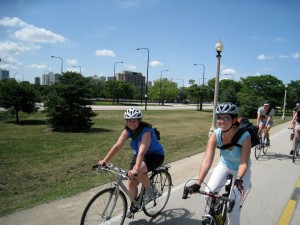 Every day, thousands of people bicycle to work via the Lakefront Trail spanning Chicago’s beautiful lakefront parks and connecting neighborhoods from Edgewater to Hyde Park with the Loop.

As part of its role to promote bicycling, walking and public transit over environmentally costly and sedentary forms of travel, Chicago’s Active Transportation Alliance has been monitoring conditions on the Lakefront Trail for years. Active Trans issues regular blog posts on major obstructions and ongoing detours on the trail, receives complaints and notices from commuters and works directly with the Chicago Park District to resolve issues as quickly as possible.

Now Active Trans proposes to expand their ongoing conservatorship of the Lakefront Trail with a new reporting system that allows commuters to instantly update trail conditions via Twitter. Commuters using the trail need only tweet their update and include the hashtag #CHILFT in order for it to appear instantly in Active Trans Lakefront Trail twitter feed, which will be displayed, along with blogs and other relevant media, at www.activetrans.org/lakefront.

“We wanted to take it to the next level, to make our coverage more immediate and more relevant,” says marketing and communications director Ethan Spotts of the new crowd-sourcing effort. Furthermore, Spotts says that Active Trans has even enlisted the help of several “volunteer scouts” to help monitor the trail. These elite cyclists are either regular commuters or in training, using the Lakefront Trail early every morning, and will be able to contribute the first reports of the day. Almost like the traffic choppers. (David Wicik).