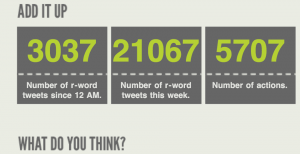 LifeMyWay, a Chicago-based advocacy campaign for people with developmental disabilities in Illinois, has created The Social Challenge (TheSocialChallenge.org), offering a live stream of tweets containing the use of the word “retard” by those who do so to describe strangers, celebrities, inanimate objects, families, friends and even themselves in an adverse manner. “Our mission,” explains Angela Heuer of the LifeMyWay campaign, “is to foster a society where people with developmental disabilities are treated as equals, as parts of a community.”

After reading the offending tweets, registered users of The Social Challenge can confront the tweeter directly. “What we’re doing is something that has never been done before,” says Heuer. “We’re not merely asking participants to sign a pledge or make a promise. Instead we’re spurring them to take real action in the form of engaging tweeters whose tweets contain the R-word.”

Reaction to the campaign have been mixed, including concerns about privacy rights of tweets published on the live feed of TheSocialChallenge.org. “All of the tweets shown on the site come from public Twitter accounts visible to anyone with an Internet connection,” says Heuer. “If you don’t want to appear on the site, either stop using the R-word on Twitter or restrict your account. It’s that simple.” The Social Challenge has created a blog and a Facebook album showcasing the reaction of confronted Tweeters, many of whom are apologetic and express gratitude for being informed of their offensive behavior. (Tiana Olewnick)