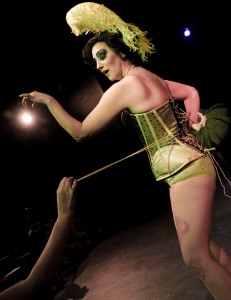 “Let’s be fabulous and fantastic,” announces Cyon Flare, host of the Windy City Burlesque Fest’s opening-night party. “And remember your burlesque etiquette: laugh, clap, scream and yell. Tell ‘em to take it off if you like what you see. And if you don’t—be respectful and shut the fuck up.” The St. Patrick’s Day crowd at Hydrate in Lakeview does exactly as instructed as dancers take the stage to tantalize and give a glimpse of what to expect throughout the festival.

The Burlesque Fest, at the Greenhouse Theater over the weekend, is produced by two Chicago troupes: Belmont Burlesque Revue and Vaudezilla. These local ensembles share a passion for paying homage to “old school” burlesque, as described by Jack Midnight, executive producer of Belmont Burlesque Revue and host of the festival. “Chicago has always been a big Burlesque town,” Midnight explains. He describes Chicago as “the birthplace of American burlesque and home to its biggest scandals.” Most notorious is Sally Rand’s “fan dance” at the 1933 Chicago World’s Fair where she was publicly filmed and photographed dancing in the nude but hidden behind long white ostrich feathers, epitomizing the burlesque tease and causing a national rustle with her risqué technique. Not surprisingly, the art of burlesque has changed in the last eighty years, but it still holds true to certain conventions: choreographing clever ways to take one’s clothes off in front of a live audience without baring it all. 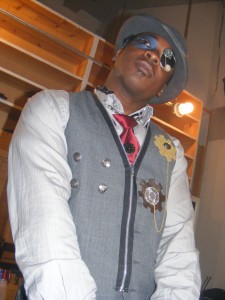 Pasties and merkins are a common denominator nowadays, protecting nipples and crotches from the audience’s view. Otherwise, each act is unique to the performer. “The show in its entirety may belong to everyone involved,” says Paprika Ame of Vaudezilla, “but your time on stage is your own. It’s a freedom that is artistically empowering—even when you’re in a troupe, you’re still an individual.” A critical part of burlesque is taking on a character. Backstage before the festival, the performers costume themselves as Native Americans, flappers, divas, chefs and more. They stretch, rehearse and make sure their genital adhesives are properly attached. “I was a professional dancer for twelve years” before getting involved with burlesque, says Ray Gunn. “I fell in love with it,” he explains. “I used to think, ‘Oh that’s fun, not serious.’ Then I actually did [burlesque] and realized that all of this is an art form with so much strategy.” Gunn uses his background in ballet, modern and other polished dance styles when choreographing performances rich with burlesque gimmicks and cheeky taunts of nudity.

Gunn, along with Jett Adore and Bazuka Joe, make up Stage Door Johnnies, which they say is the only all-male burlesque ensemble in Chicago. “Burlesque is a female-driven art form, it is a woman’s approach. Guys coming in—it’s a big fucking deal,” says Red Hot Annie, co-founder and producer of Vaudezilla. Men performing burlesque is not mockery of the craft; rather, it is a tribute to women. “When people think of men doing burlesque they think of drag—but it is not drag when they”—Annie shifts her shoulder under her chin, flutters her eyes, kicks her leg up and holds it out with a pointed toe—“that is a tribute.”

For decades, burlesque has matured, transformed, adapted and fluctuated in mainstream popularity. “When something becomes popular there will always be those that are intrigued and inspired and there will always be those that toss it aside as a passing fad” says Ame. When not in her burlesque character, Ame is a housewife. She has only recently started performing on stage for Vaudezilla and plans to continue developing her newly discovered passion. “As far as those that would consider contemporary burlesque a fad, it doesn’t bother me much,” Ame explains, “I’ll still be trying to come up with new and imaginative ways to entertain in this genre long after they’ve stopped paying attention.” (Tiana Olewnick)