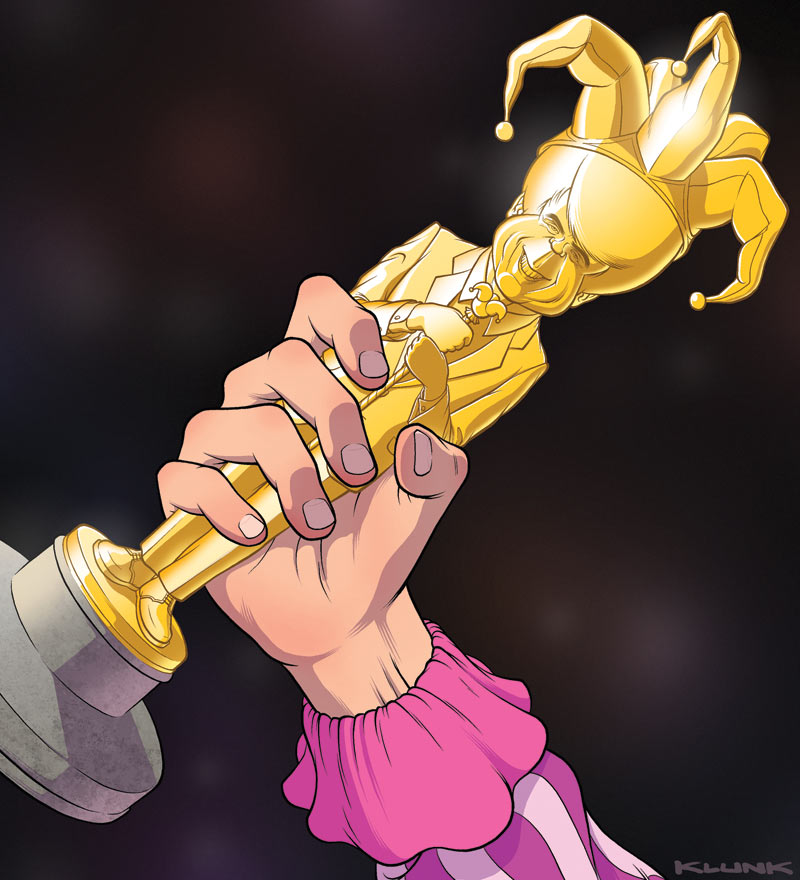 We live in a city of fools.

Consider: our most famous living musical export, fool. The most powerful man in Chicago media (until recently), fool. Our World Series-winning baseball manager, fool. But it’s our politicians, and ex-politicians, who put us into a special category of our own. In fact, a certain ex-governor, too foolish to even be named, would see the Trophy of the Fool cast in his likeness, if such a thing existed. And he’d be proud of it.

But it runs much deeper than him. Our sitting mayor, though perhaps too powerful to qualify, exhibits a running repertoire of fool-like behavior, whether it’s his sometimes impetuous leadership or, more endearingly, his losing battle with the English language. And our incoming mayor was so well-known for a particular brand of foolishness that he spawned a twitnit of a doppelganger who’s already parlayed his tomfoolery into fifteen famous minutes and a book deal.

He that has and a little tiny wit—
With hey, ho, the wind and the rain,—
Must make content with his fortunes fit,
For the rain it raineth every day.
—The Fool, “King Lear”

So what is a fool? A hint, perhaps, can be found in the origin of the word, derived from the Latin follis, which translates loosely into “windbag.” Although the word has many uses, our conception of the fool here is an extension of the jester, or fool in the Renaissance Court as one who serves to amuse us. And in doing so, serves himself.

Parsing the fools of politics can be precarious. Are Todd Stroger and Jesse Jackson Jr. fools as some would say? Foolish, perhaps, but not fools. They do not amuse us. Carol Moseley Braun? Nay, though had she been mayor, perhaps, as her “crack attack” did at once portend.

But Rob Sherman? Yes! For what other municipality, which other state boasts its own public atheist? Fundamental Christians are a dime-a-dozen in the body politic but Sherman is one of a kind. A legendary gadfly at public meetings and notorious litigator over all incursions of church into state both large and small (he once unsuccessfully sued to block the naming of the Bishop Ford Freeway), Sherman seems to believe that his activism is good for business. A longtime travel-agency operator, Sherman’s web site offers the following, alongside “Rob Sherman Advocacy – Fighting injustice, one victory at a time”: concert promotion, delivery services via “The Sherman-ator” and small airplane sales. Not so sure about that last one: When we fly, we prefer to have the Big Man Upstairs on our side, just in case.

And then there’s Scott Lee Cohen. Sure, we voters sold him the Democratic nomination for lieutenant governor for two million bucks, then pushed him aside when we realized who we’d chosen. Instead of going gently into the night, he decided to wage a write-in campaign for governor. And frankly, the seemingly endless hubris of this low-grade Donald Trump, a steroid-pumping pawn-shop operator implicated in holding a knife to the neck of his hooker girlfriend, intrigues us on a certain level. Until we remind ourselves that hookers are people, too.

With Mayor-elect Emanuel’s recent trial balloon about cutting the size of City Council in half still floating in the air, the prospects are intriguing. Who’d go? The cartoonish characters of Ed Burke, Berny Stone and Richard Mell? Or the seemingly more serious but independent-minded likes of Scott Waguespack, Robert Fioretti and Tom Tunney? Good government it may be, but say goodbye, perhaps, to the feast of fools that Chicago City Council proceedings often resemble.

Cohen’s not the only one who’s made millions in business and decided to impose his charms on a larger public. Randy Michaels, the now-deposed Tribune CEO, turned the executive suite at the Tower into the Delta House, reaping a reputation for poker games in the Colonel’s sanctum, cash “booby prizes” for well-endowed waitresses and hiring his own personal court jester, Lee Abrams, to generally run amok. He should have known that the key to being a fool in business is to run your own show. Billy Dec, the Chicago nightclub impresario, is legendary for his unfiltered self-promotion: his blog, A Chicago Thing, leads off with his “TV/WEB/Film/Hosting/Acting” reel, a note that makes sure we know he “won me an Emmy” and a clip of his “Intro by Barack Obama: a huge honor.” Nearby, a prominent Twitter aggregation offers us entrée into “What My Friends and I Are Doing.” And did I mention that David Schwimmer is his #1 bud? But as much as we might roll our collective eyes at Dec’s missing humility gene, we’ve got to also give him his due: he’s parlayed his self-promotion into a tidy little restaurant and nightlife empire and, well, he’s met the president, which is something we can’t say.

Though Mike Ditka deserves credit for setting off the run of fools in Chicago sports these past few decades (see story)—Dennis Rodman, anyone?—baseball has become our sport of fools, and none can compare to White Sox manager Ozzie Guillen. Ozzie is our beloved fool, the one who led us to the Promised Land, but rarely a day goes by in season when he’s not entertaining us with his uncontrolled charisma, like this gem: “But one thing about Wrigley Field, I puke every time I go there. That’s just to be honest.” Or this, also about his rivals’ ballpark: “You are going to take batting practice and the rats look bigger than a pig out there. You want to take a look? I think the rats out there are lifting weights.” No wonder Sox fans love the guy.

Sox fans might also suggest that long-suffering Cubs fans are the fools themselves, and certainly Wrigleyville on game day won’t put up much of an argument, but the team has its own share of fools, even without the legendary dust-kicking antics of “Sweet Lou” Piniella in the manager’s seat. Consider Carlos Zambrano, the ace pitcher with an uncontrollable temper. Does he amuse us? One local sports blog calls him the “The 91.5 Million Dollar Douche Bag.” He picks fights with teammates that get him suspended and then dines with Ozzie Guillen the same day. (Shoot, already used “feast of fools.”) Even Harry Caray, deceased since 1998, looms large as the fool of the Cubs, his statue a mecca for drunken fans, his seventh-inning stretch memorial seemingly stuck in perpetuity, his restaurant reeling them in as if his ghost might just pull up a cheer and order a beer with them.

It must be something in our water. We wait for decades for Chicago’s ascent into the hip-hop firmament and then our trailblazer turns out to be Kanye West, one of the genre’s greatest talents and one of its biggest babies. No need to recount West’s antics here—just google “matt lauer kanye west” and you’ll sample just a bit of his notoriety—but his fans, and we count ourselves at the top of that list, especially relish his unbound ego and id on Twitter. Just dip in anywhere and sample a delicious morsel like “This week has been a bad massage… I need a happy ending.”

What ‘Ye’s got going for him is true artistry, something that still eludes fellow rapper Chet Haze (see story) and painter Matt Lamb (see story). That’s not a problem for the accomplished painter Wesley Kimler who, in spite of his success, has a notorious reputation in the art world for his vicious, mean-spirited attacks—on his blog, on your blog, on voicemails—against those who slight him or whose work he deems inferior in any way. Chef Graham Elliot Bowles established his reputation at the helm of the oh-so-refined Avenues restaurant at the posh Peninsula Hotel and has maintained his reputation for culinary excellence at his more attitudinally casual Graham Elliot as well as the recently opened upscale sandwich emporium, Grahamwich. But his foray into reality food television unleashed the beast within; before long he was cladding his remarkable girth in Chippendales garb and getting into ill-advised public spats with local food critics. Like so many of our favorite fools, Elliot’s mastered Twitter for the art of public foolishness, recently announcing his newest venture, a food truck dubbed the “Grahambulance,” and illustrated with a vintage VW bus.

But there’s no denying that Graham Elliot is a talent, a legitimate star. In Chicago, our fools are often our heroes, our success stories. Who can blame a certain former governor and first lady for taking things too far? Is it wrong to go from leader of one of the nation’s biggest states to a low-rent Elvis impersonator? Why doesn’t eating bugs on national television bring the adoration of the masses?

They should have listened to the mantra of one of our archetypal fools, a Chicago born-and-bred bouncer who became famous for his Mohawk, buff body and gaudy jewelry and, later, his chainsaw tirade against a hundred trees on his Lake Forest estate.